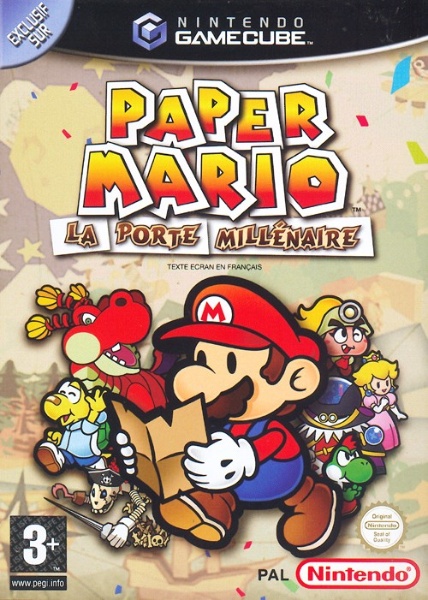 A thousand years ago there was a city. One day the city was buried. Another city was built on top, and all that remains of the previous city is a door. This is where the title "the thousand-year door" comes from. It's not known what could be behind this door, but everyone has different theories.

Princess Peach finds a map and mails the map and a letter stating that Mario must come. So Mario comes to place called Rogueport where Peach was last seen. There he meets a female goomba named Goombella. Mario shows the map to Goombella. Goombella then takes Mario to her archeology professor. The professor decides to take Mario to the thousand-year door. When Mario stands in front of the door, the map begins to show the locations of stars which open the door. The adventure begins from this point.

Mario can jump, run, hammer, talk to people, etc.. Mario finds many partners on his quest. Battles play out on a stage in front of an audience. In battle, Mario must keep his fans happy by executing action commands (hitting buttons at the right time during his attacks). Occasionally, in battle, the crowd will throw things at Mario. The player can attack the crowd at this time.