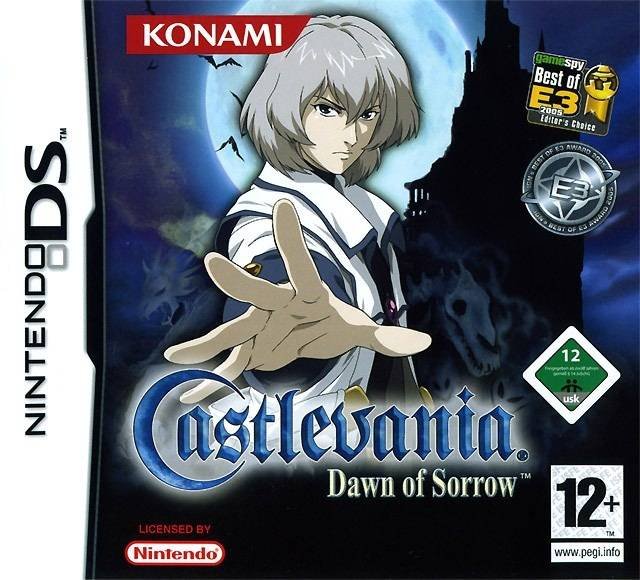 Set one year after Castlevania: Aria of Sorrow, the first Castlevania game for the DS has you playing Soma Cruz again. While attempting to return to a normal life Soma is attacked by the leader of a cult with the intention of reviving Count Dracula. He, as well as friends from his last adventure, are drawn to the cult's headquarters to prevent another age of darkness.

All the action takes place on the lower screen, while the top screen is used to see the map or your character's stats. Soma can still equip various kinds of weapons, armor, and monster souls, although the exact powers of the souls have changed slightly from the previous game. Instead of multiples of the same soul just taking up space they are now necessary, as many abilities will not reach their full power unless Soma possesses nine duplicates of the soul. Yoko Belnades has set up an enchanting store inside the castle, allowing Soma to merge souls with weapons in his possession to forge more powerful weapons. The game also takes advantage of the touch screen feature to let you draw magic runes to perform powerful moves to defeat evil monsters.

For the first time in a Castlevania game simultaneous multiplayer modes are possible. Place monsters in a series of rooms and then blaze through it with a friend over wireless connection, either competitively or cooperatively. Trading extra souls between carts is also possible over wireless communication.

The mobile version is a fairly genuine port of the original game with a few minor differences. It adds a new special rare item: the lost soul vial. This item can be used if Soma dies and resurrects him. There is also the bat altar which can be used when Soma owns the bat form ability. Soma walks on a bat altar with the bat ability and is teleported to the linked bat altar. The inventory is strictly limited to weapons, armors and magic spells. It is not possible to store food, life potions or other items.