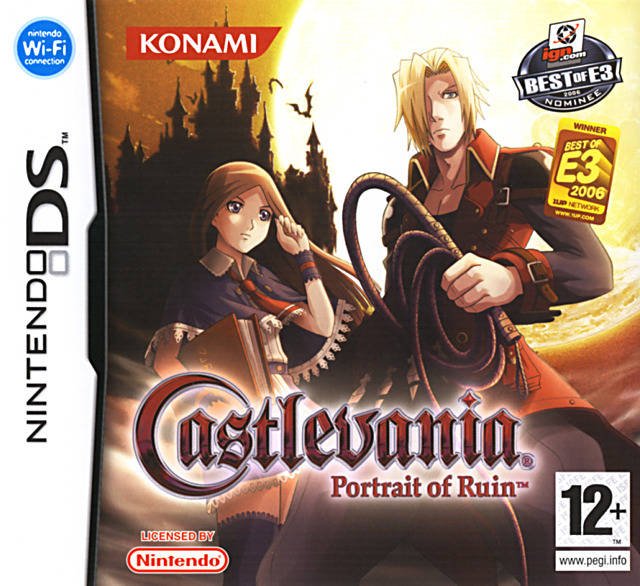 In Castlevania: Portrait of Ruin you control two characters, a vampire hunter named Jonathan Morris and a young witch Charlotte Aulin. The two heroes must stop Brauner, a vampire artist devising a plot to use magical paintings to draw power from Dracula's castle. In addition to Brauner's castle you can explore environments such as Egyptian deserts and otherworldly carnivals via paintings which Brauner has scattered throughout the castle. A mysterious ghost named Wind offers rewards if the two heroes are willing to complete quests for him, such as finding rare monsters or mastering abilities.

In the game you can freely switch between Jonathan and Charlotte, so you can decide which character is best for battling against the vampires' army. Both characters have unique lists of armor and weapons they can equip; whips for Jonathan and magic spellbooks for Charlotte. Charlotte is able to find many different kinds of spells throughout Brauner's castle and paintings, including magical attacks, form changing spells, and stat boosts that affect both Jonathan and herself. Similarly Jonathan can find items that act like the sub-weapons of previous Castlevania games, although now he can select which to use from the menu, and each weapon grows more powerful the more it is used. Both characters can also combine their powers for very powerful Dual-Crush that drains a lot of mana. Also, at the first time in the series, both characters can be on the screen simultaneously, helping each other.

Castlevania: Portrait of Ruin also includes a Wi-Fi and wireless co-operative multiplayer mode where two players fight side by side through pre-set challenge courses in a limited time. Players can also set up a shop on either Wi-Fi or wireless and sell their items to other players.