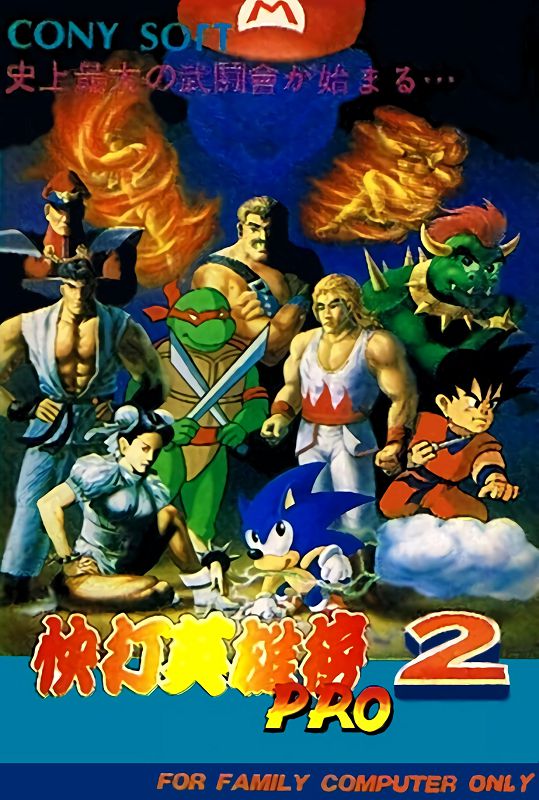 World Heroes 2 is a bootleg fighting game created by Cony Soft in 1994, notable for its unusual roster of characters.

This is a fighting game by Cony Soft which features 12 different characters, all of which are playable. It has most of the flaws of Cony's other fighting games such as poor controls, typos, cheap AI and the lack of a proper ending. The game includes music and graphics taken from various other games and the gameplay is practically identical to Cony's other pirates, albeit with some different specials for the characters. It's possible that they hacked Fatal Fury 2 in order to make this due to the similarities it has with that game. It includes an option to change the IRQ, a long, unskippable intro and Andy, Laurence and Mai are playable characters in the game.

The Street Fighter II and Fatal Fury characters, along with their stages, are reused from other Cony pirates based on those games. This includes M Bison/Vega's stage which is taken from this variation of Street Fighter II Pro. As well as this, Haggar's sprites are edits of Zangief from the original version of that game. Goku and Leonardo are mostly based on their incarnations from Dragon Ball Z: Super Butouden and Teenage Mutant Ninja Turtles: Tournament Fighters (SNES) respectively. After a fight ends, (as long as the winner is controlled by a player and not the computer) a win quote screen appears with the winning character standing in their victory pose. There is only one quote and it's the same for all the characters: "You're unlucky to have to fight me" (which was originally one of Andy's win quotes in Fatal Fury 2). There's a DIP switch that switches between US and Asian versions of the game. However, the only difference between them is the title screen logo and font color.

There is a revision called World Heroes 2 Pro - most copies of the original version say "Pro" on the box and cart, but in the real "Pro" version it also appears on the title screen. It adds an option mode not found in the regular version, where the player can listen to the music, set the timer, and make player 1 invincible. These options would be carried over to Mortal Kombat II.

A translation patch was used to solve some grammar problems and character names.