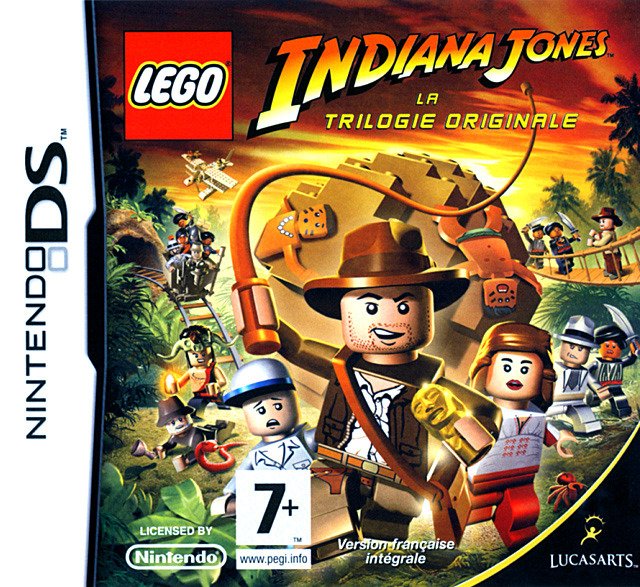 By Perichor : July 27
The Nintendo DS version of 'LEGO Indiana Jones: The Original Adventures' allows players to fight their way through 18 levels based on the Indiana Jones film trilogy with LEGO characters modified from these films. The family-friendly approach from the other consoles is present in this version, cutting out the violence and religious aspects from the movies.

The Nintendo DS version plays similar to the other console versions but with a few differences: Female characters jump the same height as male characters, hieroglyphics to be solved by scholar characters are absent, mechanics that fix machines are also cut and buried treasure is now unearthed by characters with a spade. The 'phobias' aspect of each character is also cut from the Nintendo DS version, making its gameplay more easier. Occasionally, the player can also find weapons hidden throughout the levels used to defeat the enemies from either far-range (with rifles and pistols) and close-range (swords and umbrellas).

Barnett College still acts as the hub for the DS version, but includes rooms for the 3 films (replacing the Bulletin Board of the other versions), Indiana Jones' Office (to buy characters, extras, hints and so on), the Game Room (where players must solve puzzles and complete minigames to earn gold bricks) and the Artifact room (where players can view collected artifacts at any time, in which 10 artifacts from each level are required). The Mail Room (in which parcels are collected to unlock extras) is also absent and is instead replaced by the Red Bricks (which still unlock extras in the pause menu).

The game includes a variety of minigames that utilise the Nintendo DS stylus (such as the 'LEGO Logo' games where players need to rotate and fit pieces into their correct slots against the clock), as well as using the console's in-built microphone to blow out torches (in order to reveal treasures) and inflate rafts to get across water.

Unlike previous LEGO games for the DS, this game now allows Stud Multipliers to be combined together to earn more Studs (which must first be obtained by Red Bricks in certain levels).

DS Multi-Card Play also allows 2 players to co-operate with each other and complete the levels together.