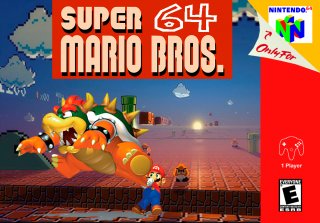 Super Mario Bros. recreated in the Super Mario 64 game engine. You get infinite lives to play through the game, but are given a ‘Par’ for each level, referring to the amount of lives an average player should lose per level, and you earn points for losing as few lives as possible. There are four playable characters (Mario, Luigi, Wario and Waluigi), each of which has their own unique jump height which can make the game harder or easier (I recommend Wario or Waluigi for your first playthrough).

Indispensable: To launch the rom you have to go to parameter then in options it is necessary In Project64, click on "Options" then on "Parameter" in the "Options" tab you must go to "Config: SUPER MARIO BROS 64".

Then you have to click on memory size and put it from 4 to 8mo.

Then restart the game.