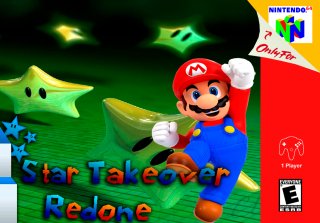 Star Revenge 1.5: Star Takeover Redone is a ROM Hack made by BroDute. It is a total remake of Star Revenge Redone. It was first released on August 14, 2015 with 121 Stars. An improved version was released on December 9, 2018 which changed the name and increased the star count to 125.

There are also redone mission objective markers; this includes spawn locations for stars and the collectable secret spots. The hub worlds are very similar to how they were in the first remake, but they have been retextured and Weegee Amps have been added.

Indispensable: In Project64, click on "Options" then on "Settings" in the "Options" tab, you must uncheck the box "Hide advanced settings".
Then you have to go back to the settings, there will be many more tabs, click on "ROM settings", and set the size of the RDRAM to 8mo