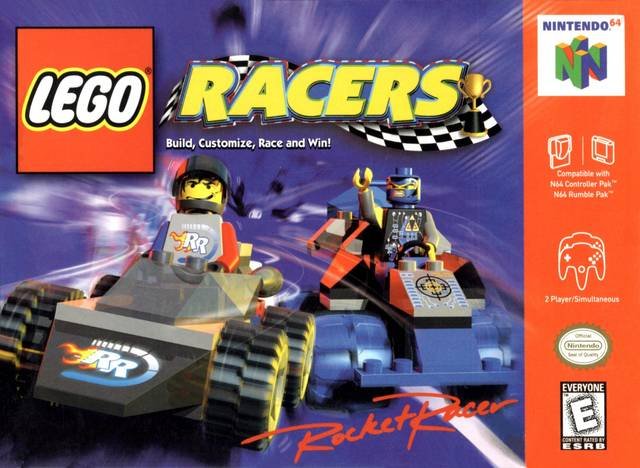 If, nowadays, Lego games are numerous and sometimes of honest quality, it was not really the case 10 years ago. This Lego Racers, as you can imagine, is a racing game. And, as you can also guess, it has nothing to do with a Ridge Racer. No, Lego Racers is a direct competitor of Mario Kart 64, only not as good.

We can't say that the game is ugly, but even compared to Mario Kart (released at the end of 96), it gives the impression of a cold game, too clean... The vehicles are well modeled, the scenery is varied (but empty). The game is fluid; not fast enough, but it is still much better than Penny Racer. The soundtrack is insignificant, rather in a good way. The music is very simple but not irritating. The sound effects... you don't care about them. On the gameplay side, a big slap in the face from Mario Kart, which totally surpasses it on this point. It's easy to handle, but very soft. You can't do any skids; otherwise it looks like Mario Kart. Weapons are quite numerous, but not very charismatic: there are cannonballs, turbos, a grappling hook, an oil puddle, a shield... and that's it! 12 circuits in 4 different environments (the Moon, Egypt, a forest and cities). Correct. Each environment makes up a championship (so 4). That said, the tracks are not very inventive, and there again they contribute to the fact that we are quite bored. Driver level... half a dozen. But Lego Racers offers you the possibility to let your creativity run wild, and to create your own vehicles and drivers... just like in real Lego! Lego Racers joins the mass of mediocre competitors of Mario Kart, without standing out especially for its quality. Let's just say that I find it much better than South Park Rally, but not as good as Penny Racers.