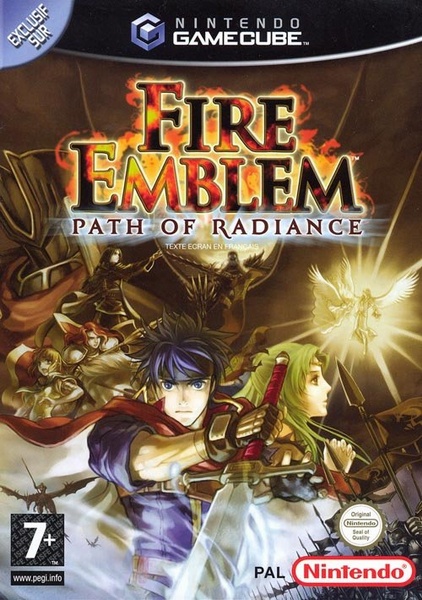 Path of Radiance is the first installment in the Fire Emblem series to have 3D. Set on the Tellius continent, a soldier called Ike rescues the princess of Crimea and finds out that the Daein kingdom has invaded the country. He must guide her with his fellow mercenaries to Gallia. During the journey, the true reasons for the war are revealed.

You command your units across a 3D battlefield with turn-based mechanics. Each turn, you can only move a set amount of spaces over the grid. Turns can be used to visit locations, use items or attack enemies. Each battle is stats-based and has a specific objective. You do not fight yourself, instead you control the items and weapons to influence the stats, and make use of the enemies' weaknesses. The maps have different scenarios, where you have to rescue a certain character, create distractions to move past enemies, or kill certain foes.

The game is heavy on anime-styled story sequences. As with all Fire Emblem games, the characters are unique individuals that cannot be revived when they fall in battle. In order to continue with the story, only the team leaders need to survive. Characters can equip a range of weapons and possess magical abilities. Upon discovering 'hidden purposes', unique abilities can be acquired.

Shadow and light are two sides of the same coin. One cannot exist without the other. ☯️