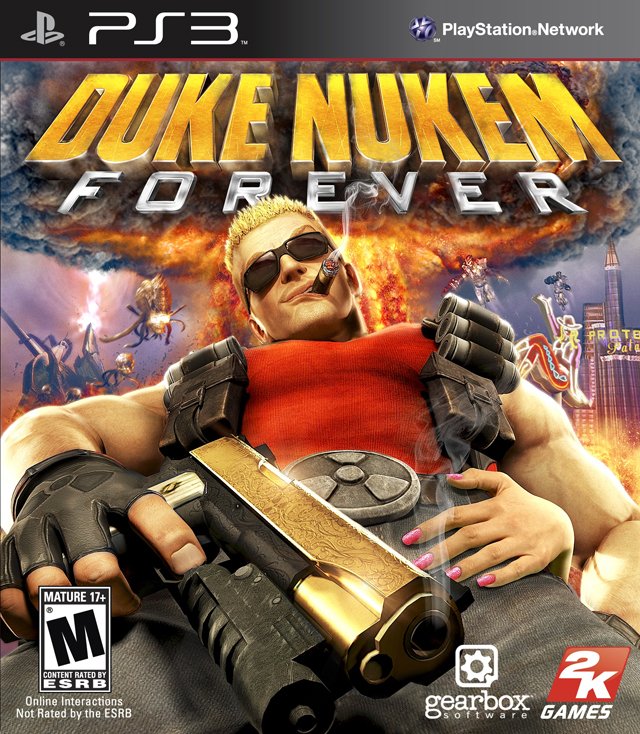 The manly tough-guy stereotype is on the verge of retirement, over a decade after he saved the world from aliens in Duke Nukem 3D. America is awash in hero-worship of the man who conquered the aliens with movies, books, restaurants, and action figures (to name a few things) of their favorite muscle-bound action hero. One day, on the way to his own talk show, Duke learns that aliens have landed on the earth once again. However, this time their intentions seem to be unclear and Duke is asked by the president to restrain himself, for fear of offending the aliens and provoking another war. Duke reluctantly agrees - only to find out, much to his relief, that the aliens are hostile after all, which means that the pop culture icon is finally back to his old ways!

Duke Nukem Forever is a first-person shooter that largely relies on the gameplay style of its predecessor, known for testosterone-fueled gunplay and humor. A few elements characteristic for modern shooters have been introduced: Duke has a health bar that refills over time, and carries only two weapons at a time, similarly to Halo. Duke Nukem also spends no time ducking behind cover, attacking, and bounding forward to cover in the way squad-based or tactical FPS titles do. Rather, players will charge through stages, running and gunning for most of the game.

Beside weapons, Duke can use pipe bombs and laser tripwires to damage the enemies, throw items, consume steroids and beer to increase his strength and reduce the damage he takes, respectively, as well as use a jetpack to fly short distances (multiplayer only). He can also use a holoduke, which creates a hologram of himself, confusing the enemies, and activate the Duke vision if the area is too dark. As in Duke Nukem 3D, it is possible to interact with parts of the environment; some of these interactions bestow benefits to the protagonist, including permanently increasing his ego bar (substitute for health bar).

The game also features various set pieces and levels that focus on driving, platform jumping, and light puzzle-solving. In certain levels Duke will shrink in size, and will have to overcome obstacles before he can be restored to his old self again. Other activities include driving a monster truck or a radio-controlled car, turret-focused gunning segments, mini-games (e.g. Duke Nukem pinball machine), massive boss battles, and the classic visit to a strip club. Of course, it just wouldn't be a Duke Nukem game if it didn't feature the Duke's crude, dry commentary throughout the game.