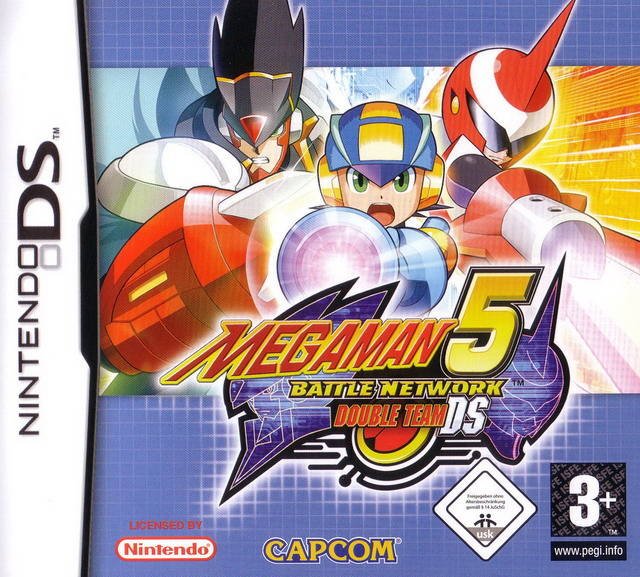 Mega Man Battle Network 5: Double Team DS is a slightly enhanced port of both versions of Mega Man Battle Network 5 (Team Protoman and Team Colonel) for the Nintendo DS. After selecting their game version, players travel through the Battle Network Universe with Lan and his Net Navi, Mega Man, as they explore the real world and the internet, as they try to discover the whereabouts of a 'Dark Chip Factory', which is being used to corrupt innocent Navis.

The game takes place in an isometric perspective, and players can explore the overworld as Lan where they can buy items, communicate with people, and find places to 'jack-in' to the Internet. Once in the internet, players take control of Mega Man, where they use him to perform the same tasks as Lan. However, the internet is also riddled with viruses that Mega Man will randomly encounter. When entering battle, Mega Man can use 'battle chips' to become powered up and deal more damage, as well as shoot and dodge opponent attacks in realtime.

Double Team DS also features minimal use of the Nintendo DS' features - players can shout into the microphone during battle to 'encourage' Mega Man and power him up, and menus are now easier to navigate through by means of the touch screen.