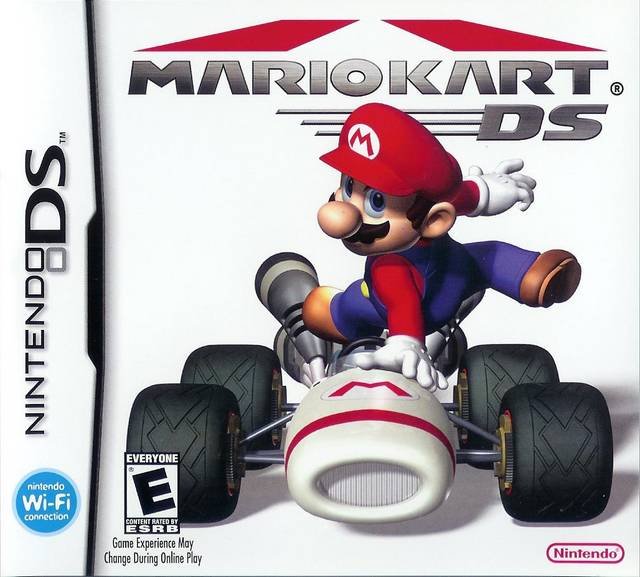 Mario Kart DS is the continuation of the long running racing game series that began on the Super Nintendo. It features 16 new tracks as well as 16 tracks from the previous 4 games, with each set split up into the Nitro and Retro Grand Prix respectively. Eight racers are initially available, each with two go-karts to choose from. A number of characters and additional karts are also available to unlock. New items have been added to the arsenal, including a Blooper squid that squirts ink onto the screens of other players and a Bullet Bill power up that transforms the player into a giant, fast-travelling bullet on autopilot.

One of the features of this version is its support for online Internet play through Nintendo's WiFi service. MKDS owners can challenge up to 3 other people in Grand Prix mode on 20 of the 32 tracks. Players can also match up with friends by trading "Friend Codes" that are generated based on the DS that is used and the copy of the game owned. Custom emblems to use on karts are supported through the game's paint program.

Battle mode is also present with 8-player support and 6 tracks. This time, there are two modes to choose from: "Balloon Battle" and "Shine Runners." Balloon Battle is similar to the previous versions of this mode, with the exception that every player starts with only one balloon, and 5 in reserve. Players can have 2 additional balloons by either holding the Select button while standing still to inflate them, or by blowing into the DS's microphone. "Shine Runners" tasks players to collect "Shines," with the winner being the one that has the most.

New to the series is "Mission Mode," which consists of a series of single player objective-based missions. Each mission takes place on a section of a race track and tasks the player to accomplish goals not normally seen in the other game modes. Such tasks include picking up coins on the track, using items to take out enemies, and racing through numbered gates. Missions are split up into 6 sets of 8, with a 9th mission for each where players must battle against a boss character.

Local wireless multiplayer is supported for up to 8 people in Grand Prix, VS, and Battle Modes. Time trial "ghost" data can be shared as well, and DS owners who don't have the game can use the Download & Play option to join in Grand Prix mode. However, non Mario Kart owners are limited to selecting Shy Guy as their character.