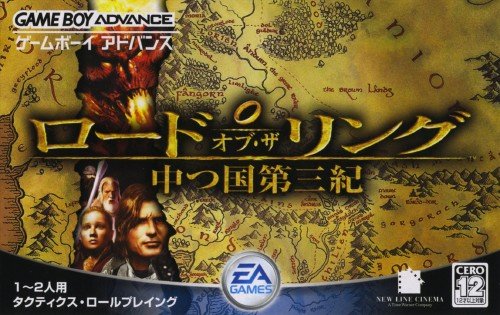 Unlike the console versions, the Game Boy Advance version gives players the option of playing the heroes from the trilogy, selecting their commander from the likes of Aragorn and Gandalf, or even using the evil forces of Mordor and choosing the Witch-king or Saruman.

From there, the player experiences over 30 battle scenarios, ranging from the well-known battles of the film (Helm's Deep and the Pelennor Fields), small skirmishes (Amon Hen and Osgiliath), and even some more battles just hinted at in the movies (Isildur's ambush, Theodred's death at the fords of the River Isen).

In each battle, players choose their companions (again, classic characters from the films such as Legolas and Gimli are available, along with bad guys like Wormtongue and Gorbag), and face off against the foe with dozens of troops, including orcs, trolls, Gondorians, Riders of Rohan, Easterlings, Mumakil, and dozens more.

Unlike other turn-based games, you can't move all of your units each turn. Rather, the board is divided into three "flanks," and your hero in each flank generates the command points you use to move units in that flank. Thus, good leaders like Aragorn may have a lot of command points to give his flank (3-4 is typical), while Gimli may have less, but be a better warrior to make up for it.

After a battle, you can upgrade your heroes with equipment and special skills, and move onward to conquer the next area of Middle-earth.