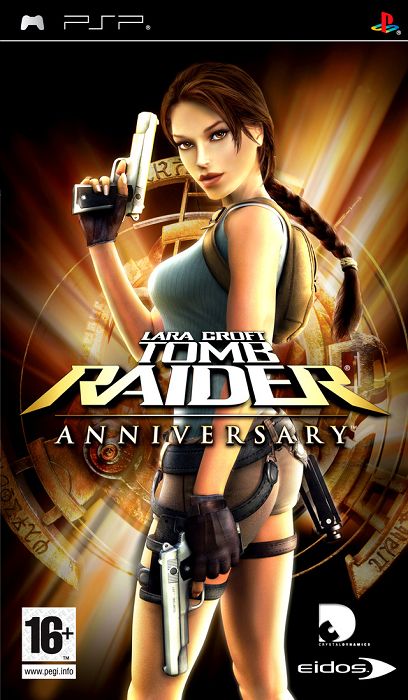 Lara Croft Tomb Raider: Anniversary is a remake of the original Tomb Raider with a technically more advanced graphics engine. It has the same basic storyline, though some cutscenes and much of the dialogue within have been expanded or modified in other ways. Locations correspond to those of the original version and are accessed in the same order, but have been re-designed with different layouts and mostly completely different puzzles which allow implementation of new moves introduced in Lara Croft Tomb Raider: Legend: swinging on ropes and using a grappling hook at specific points.

Puzzles are generally more focused on acrobatics in this version, ledges being much more prominently featured as a level design element, requiring combinations of jumping and shimmying across them to access areas. This type of gameplay replaces the key-retrieval and block-pushing puzzles of the original almost entirely. Combat is similar to that of the first game, though the player must now manually activate targeting. Some boss fights have been made a separate enclosed stage rather than being part of the exploration as in the original version. These fights may have puzzle-solving elements and often require the player to use Lara's new "adrenaline dodge" ability, which slightly slows down time when the opponent charges at her while in an "enraged" state. Some cutscenes require the player to participate in quick-time events.