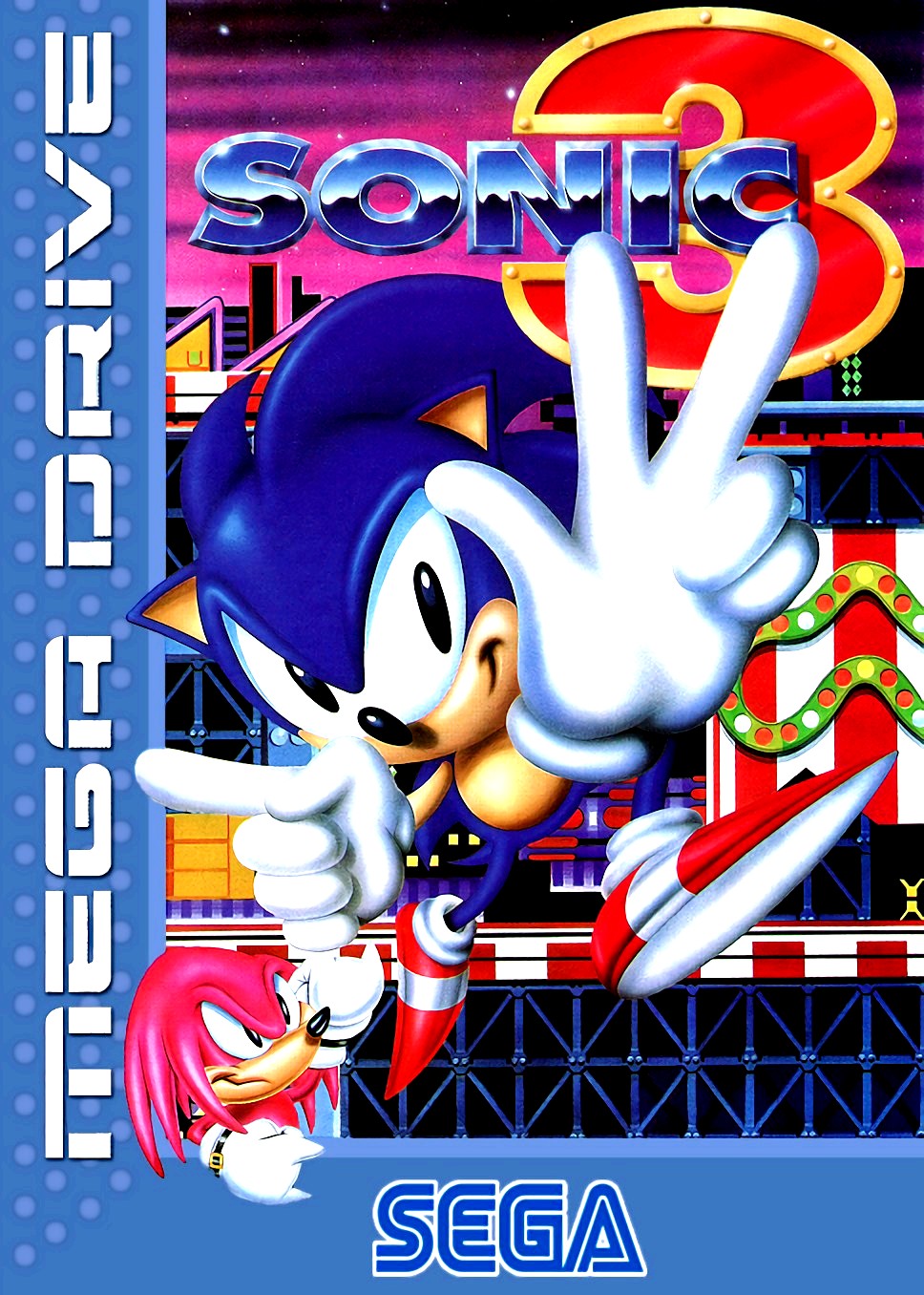 Dr. Robotnik's Death Egg has crash-landed on Floating Island, so called because it harnesses the power of the Chaos Emeralds to float in the air. Robotnik needs them to repair the Death Egg, so he tells the guardian of Floating Island, Knuckles the Echidna, that Sonic and Tails are there to steal them. With Knuckles tricked and trying to stop the heroes at every turn, will they be able to stop Robotnik in time?

Sonic the Hedgehog 3 is the third in the Sonic series of games. As with the previous games, it is a side-scrolling platformer based around speed. The basic game remains the same - players collect rings to earn extra lives, which are also used for protection, and scatter everywhere when Sonic is hurt. Sonic can jump on enemies to defeat them, and Spin Dash by holding down and the jump button, then letting go of down.

New to Sonic 3 are three different types of shields - the Fire Shield (which protects you from fire but disappears if you enter water), the Water Shield (which lets you breathe underwater infinitely) and the Electric Shield (which pulls nearby rings towards you). Sonic can use extra abilities when he has these shields by pressing jump while in the air - either a horizontal fireball dash, a vertical bubble bounce, or an electric double jump. If Sonic has no shield active, he can activate a brief energy shield, also by pressing jump in the air. Tails cannot use the shields' special abilities, but he can instead either fly or dog paddle (in water) for a limited time. He can also carry Sonic with him while doing so.

There are now two types of bonus stages - one is available by collecting 50 or more rings, running past a checkpoint lamppost and then jumping into the stars (as you could in Sonic the Hedgehog 2. This stage give you the chance to earn bonus rings, lives and power-ups. In this stage, there is a giant gumball machine. By hitting the crank, you'll spit out a bonus item that can either be rings, lives or bonus shields. The stage is over when you fall down the bottom of the screen.

The other, more important, Special Stage can be accessed by jumping into giant rings that are hidden away in secret areas in each level. In these stages, you must collect all the blue spheres while avoiding the red ones (which end the stage early). Collecting all of the outer blue spheres around square or rectangle sphere formations will turn them all into rings - if you collect 50 or more in this stage, you can earn a continue. Once you collect all the blue spheres in the stage, it clears and you earn one of the seven Chaos Emeralds.

Sonic 3 features six different Zones, which are made up of two Acts. At the end of each Act is a boss that must be defeated to complete the stage and rescue Sonic's animal friends that Robotnik has captured to turn into Badnik robots. The zones in Sonic 3 are approximately three times bigger than those in Sonic 2, and feature multiple, branching paths.

As with Sonic 2, there is a two-player Vs. Mode, which plays in a split-screen horizontal style. There are special monitor pick-ups in this mode which do things like swap player positions, lose rings, or cause a Badnik to appear. You can also race against the clock in a time trial mode.