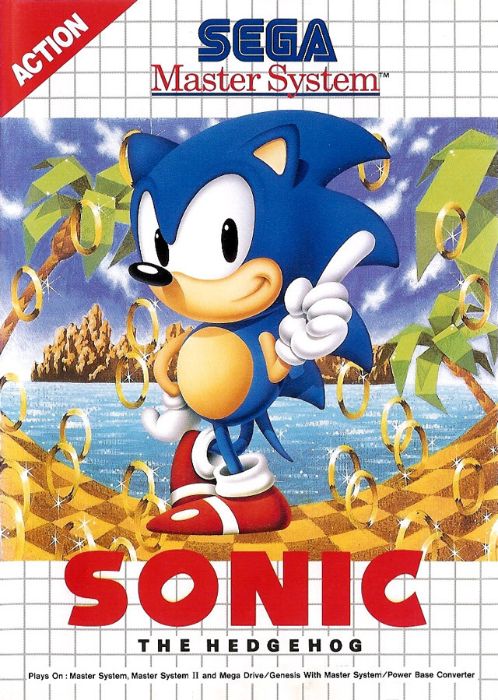 SEGA's mascot Sonic the Hedgehog made his debut in a famous Genesis title, but Sega's 8-bit systems got their own version of the platformer, featuring the same story and gameplay style, but different levels.

To stop the evil Dr. Robotnik, Sonic must traverse six zones consisting of three levels each. Most of the zones are based on those in the original game, but some are entirely new, including a jungle environment and a huge airship. Other unique differences are one level that scrolls automatically and one that is aligned vertically instead of horizontally. Most of the enemies (mechanized animals, defeated by Sonic's spikes when jumping or rolling) and power-ups (speed-ups, shields, extra lives) are the same as in the Genesis version as well. Sonic can pick up golden rings for protection (when hit, he simply loses all of his rings instead of a life) and bonuses: 100 rings gain Sonic an extra life, and 50 remaining rings at the end of a level allow access to pinball-themed special stages full of bumpers and springs. The final level of a zone is always a boss fight against Robotnik. Some of the boss fights differ in the Master System and Game Gear versions of the game, with special designs for the handheld version due to the smaller visible screen area.

Sonic should also collect the six Chaos Emeralds to keep them from falling into Robotnik's hands. In a departure from the original game, these are not hidden in the special stages but somewhere in the regular levels.