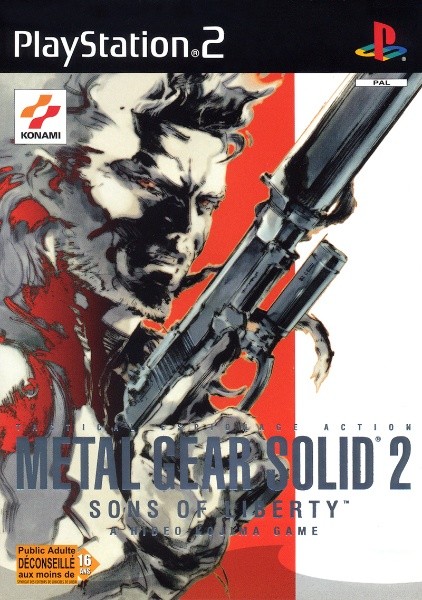 In 2007, two years after the Shadow Moses incident, Solid Snake - now working for a freelance organization known as Philanthropy - infiltrates the oil tanker U.S.S. Discovery, investigating the development of a new Metal Gear-type weapon. A confrontation with a Russian military group as well as an old acquaintance from Snake's past adventure leads to a massive detonation, after which Snake is presumed dead.

Fast-forward to the year 2009: the player takes control of Raiden, a rookie agent operating under the order of the Colonel, apparently member of a reformed Foxhound unit. His initial assignment is to infiltrate the offshore clean-up facility Big Shell and rescue the President of the United States of America, who was kidnapped by members of a terrorist organization known as Sons of Liberty. However, the matters become increasingly complicated as almost everyone Raiden communicates with appears to have a hidden agenda, and it is hard to tell a friend from foe...

Metal Gear Solid 2: Sons of Liberty is the sequel to the espionage action game Metal Gear Solid. Much of the gameplay remains the same, as the game's protagonist has to sneak past guards, outsmart them using various gadgets, and defeat the tricky boss enemies. There are a host of weapons to be picked up through out the game, some old, such as the FAMAS and Socom, and some new, such as the AK-47. Martial arts combos can be used to disable guards. It is possible to crawl through small spaces, peek around corners, and perform acrobatic leaps to get away. The protagonist can also hang from railings, effectively hiding from guard, or stick his gun in a guard's back, surprising him. The cardboard box is also back, and can once again be used for hiding.

Gadgets such as sneak suit, mine detector, thermal goggles and others can be found along the way.. The radar from the original game is still there and alerts the player to guards' positions and also shows their field of view. If an alarm is sounded the radar is disabled while the hero has to escape. In some situations it is necessary to enable the radar before it becomes possible to use it.

Like its predecessor, the game is heavy on codec conversations and cutscenes. All the cutscenes in the game use the in-game 3D engine; the characters' movements are motion captured animations.