Mario 3: Around the World 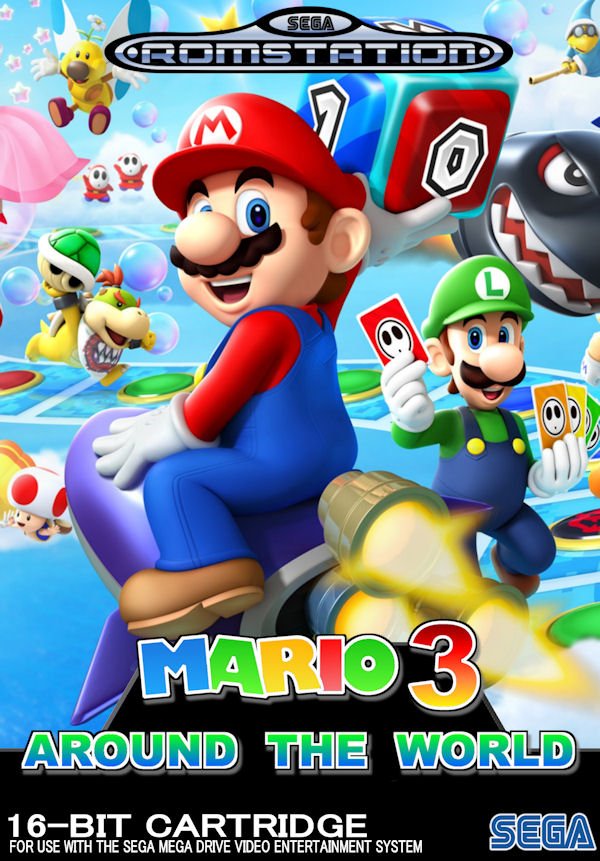 Mario 3: Around the World is a Mario-based platformer developed by BMB and published by KDS.

The game begins with an intro involving a mysterious cloud appearing over the Mushroom Kingdom and kidnapping Princess Peach; Mario then finds out from one of the Toads that Wario is behind all of this, and then sets off to rescue the Princess.

The gameplay is notable mostly for its' streamlined level design, awkward and somewhat-lacking physics, wonky hit detection and being the bare minimum for a Mario game. Mario controls similarly to his original games; A is used to run and B is used to jump. However, throwing fireballs is assigned to C instead of sharing the same button to run. The only power-ups are Super Mushrooms (although Mario doesn't grow bigger) and Fire Flowers. The only way to gain extra lives is through collecting 100 coins. Jumping is rather odd; while holding B increases your jump as expected, letting go causes you to automatically drop. Mario also doesn't abide by gravity; he instead jumps up at a specific speed and then falls at a faster speed. There's also no real friction accounted for when Mario stops walking or running; instead he'll keep walking/running for a bit if he's been moving for a while or will come to a complete stop if he's moved a short distance. Running acts more as a toggle and just increases Mario speed as he moves on the ground. There are 22 levels total; 11 Egyptian-themed levels, 6 Aztec-themed levels and 5 arctic-themed levels. Some of the pipes will actually take you to an underground area and let you skip part of a level. Enemies-wise: you have your usual Goombas and Koopas. Piranha Plants (here, they're yellow and lack a stem) and the Flurries from Super Mario Bros. 2 also appear here but they function the same way as Goombas. Pile Driver Micro-Goombas also appear but instead of jumping, they remain stationary. Nipper Plants appear as well but functioning as how the original Piranha Plants did. The only new enemy is a white rhino-looking creature standing on its hind legs who acts the same way as Goombas.