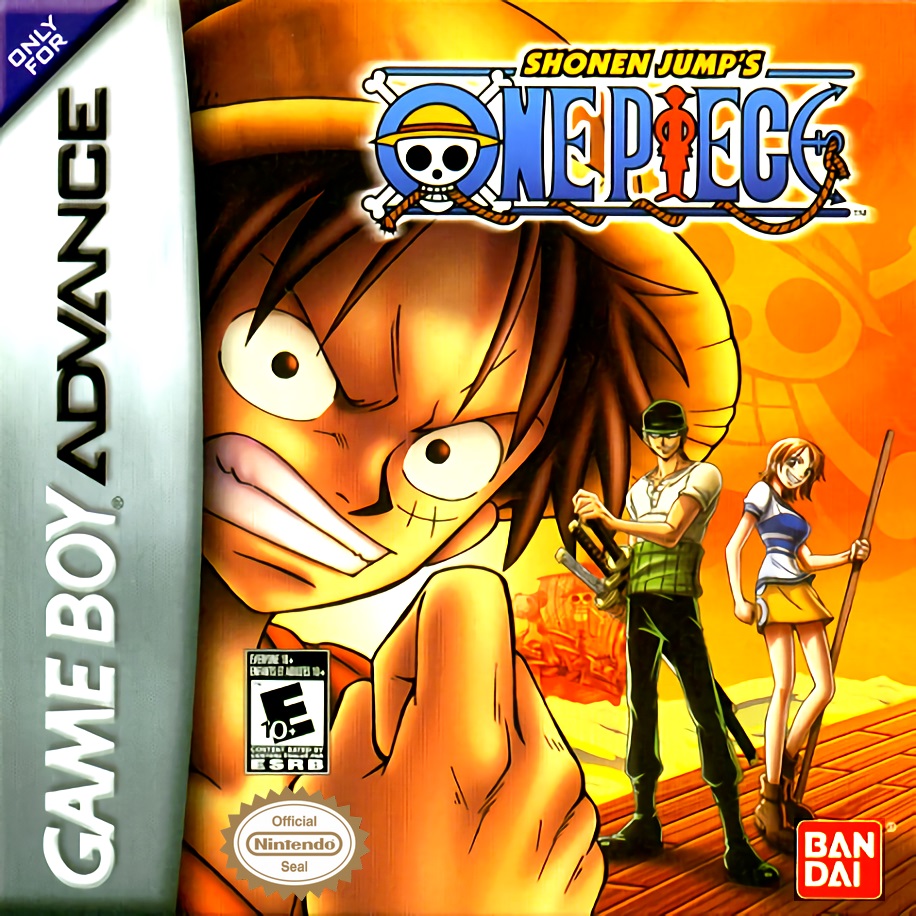 One Piece chronicles the adventures of a boy named Monkey D. Luffy, who after eating the cursed gum gum fruit, gains the ability to stretch his body like rubber. Unfortunately, eating a cursed fruit causes the person to lose the ability to swim, not a good thing if you aspire to be king of the pirates like Luffy.

Fortunately, Luffy develops several fighting techniques which utilize his rubber body. The game does a good job of incorporating some of the more prevalent ones, such as the gum gum rocket, rapid fire, balloon, spear, and the double barrel. Each technique has a particular use, so players are encourage to fight intelligently instead of using brute force. For example, the balloon can deflect bullets, and double barrel is good for knocking one enemy into other baddies. However, a certain amount of cash (The game's method of keeping score. You earn cash by beating up henchmen, mini-bosses, and bosses.) is required in order to learn the balloon and spear. Also, the double barrel and axe take up special technique points, which are built up by busting bad guys.

Not only that, but earning more cash nets other goodies such as increasing Luffy's maximum life, and giving him the ability to store more points toward powerful techniques. This semi-level up system encourages players to explore the levels, beat up all the bad guys, and find and defeat all the mini-bosses. It's also a great way of giving slightly less skilled players an edge by allowing them to beef up Luffy before a big boss fight.

Although the levels offer multiple paths and allow players to explore, most levels are way too big and sprawling. Think back to the palaces in Zelda 2. Now think about a side scroller where every level from two on is roughly the equivalent of a Zelda 2 palace. Sure, that may have worked for Zelda 2, but Zelda 2 is an adventure game with RPG elements; One Piece is a straight up action side scroller. There is no reason one single area should take a good 15-20 minutes to complete, particularly if there are hidden golden coins, some of which can only be collected if the player repeats the level. Who is going to want to repeat a long, sprawling level that is too long to wade through once, let alone multiple times?

Also, once Luffy advances in the story, crew mates join his pirate crew. However, after entering a stage, these guys and gal bolt , so Luffy must find them in every stage. That means unless you are extremely lucky or are willing to spend a whole mess of time and energy looking for all of them, you'll just have to do without some crew members for most of the levels. Sure, most of their abilities aren't much better than Luffy's, but Nami and Sanji can be essential, considering Nami can swipe food and much needed bombs, which are used to uncover secret areas, and Sanji can give Luffy a turkey which refills his health instantly. Having to look in every nook and cranny in every single stage seems like a cheap way to make this game more challenging.

If games are going to have levels this big, then the ability to look around would be greatly appreciated. Most of my deaths are not from taking too much damage, but from accidentally falling because I thought there was stuff below me. Yes, sometimes there actually are secret areas below, but due to the lack of the ability to look around, finding these is pure trial and error.

Another small problem is using Luffy's gum gum grab to latch onto various objects. If you only need to grab onto one item, it works fine, but some areas require you to go from on object to another, and the control isn't as responsive as it should be in these situations. Luckily, these areas are rarely above bottomless pits, so these will seldom lead to cheap deaths.

Fortunately, there are extra lives everywhere. Almost every stage has at least once, and these can be found again if players repeat the stage. Also, upon defeating a boss, the game whisks players off to a bonus round, in which Luffy must clear his ship of hostiles for the chance at two extra lives.

Speaking of bosses, most of them are well done, and at about the right level of challenge. I partiucarly like the fights with Don Krieg and Arlong. While fighting Don Krieg, you must first reach him by jumping from pieces of wreckage, while he fires bullets at you. This reminded me of the original Super Mario Bros. where Mario and Luigi are getting close to Koopa. Halfway through the Arlong fight, you must latch onto floating spheres and keep climbing, while Arlong slashes at you with his huge shark tooth sword. Both of these challenges help liven up the game a bit by throwing in something unexpected.

Sure, the levels are about three times as big as they need to be, but there is still plenty of fun to be found. There is plenty of good ol' fashioned beat em up action, and Luffy's crew is willing to lend a hand, provided you can find them. If you like the anime, then you'll enjoy this game. It's not as good as Grand Battle, but it's not bad.