Batman - Return Of The Joker 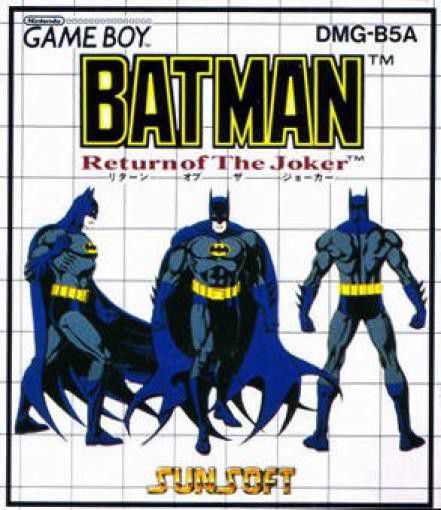 Batman: Return of the Joker for the Game Boy is a platformer in which the Dark Knight must cross four levels to confront his arch-enemy, the Joker.

The first three of the stages (Sewers, Machine Shop and Train) can be tackled in any order, but the final level only opens up once the others are completed. In each, Batman has to face obstacles like traps, conveyor belts, moving platforms and many henchmen. He can use his fists to punch enemies as well as batarangs (with limited ammunition) to knock them out from afar. Batman's grappling hook connects to ceilings and is used to pull him across chasms or up platforms. He can also utilize a wall jump to get higher in narrow spaces. Power-ups to collect are health upgrades and batarang ammunition. At the end of each level, a boss fight awaits. Some of the bosses are immune to the batarangs, but all have a certain weakness.