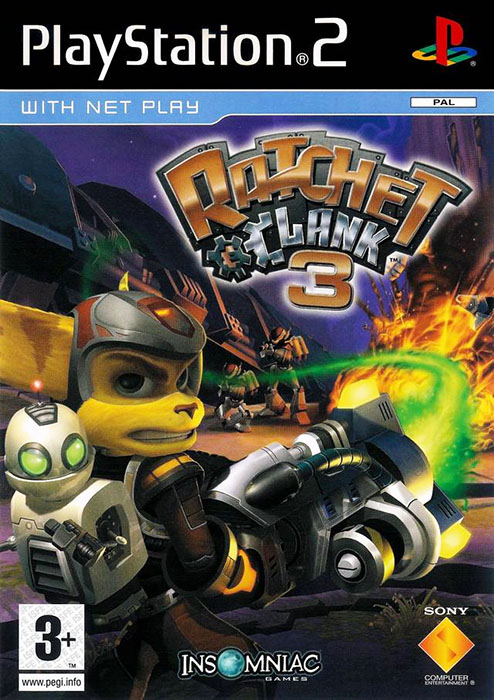 Ratchet & Clank: Up Your Arsenal is a 3rd-person action platformer, and third game in the Ratchet & Clank series by Insomniac Games.

After word spreads of Ratchet and Clank's recent conquest in Ratchet & Clank: Going Commando, Clank finds himself recognized as an interstellar robot of mystery and intrigue after starring in his own television series, Secret Agent Clank. While Ratchet is dismayed by his new sidekick status, the feelings are put aside when the twosome is called together by the Galactic President to bring peace to the universe. They find themselves traveling back to Planet Veldin to battle Dr. Nefarious, a robotic super villain who has devised a diabolical scheme to wipe out all organic life in the galaxy.

Most of the time the player controls Ratchet but occasionally the player takes control of Clank. Gameplay includes platforming but for the most part shooting up or beating up various enemies including robots, aliens, vehicles and bosses. The game features an extensive arsenal of weapons including various guns, and beat 'em up weapons that can be leveled up, increasing their power and magazine. During play, better body armor comes available and can be purchased. On the Starship Phoenix the player can also play on a video game console like device as Captain Qwark, telling the history between Qwark and Dr. Nefarious in a number of 2D side-scrolling levels.