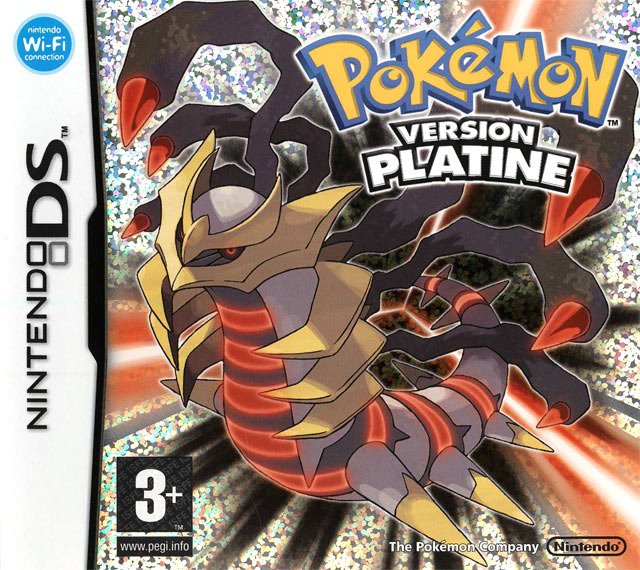 Together with Pokémon Diamond and Pokémon Pearl, this game is the 3rd games in the 4th generation of the Pokémon series. Set in a new region, Sinnoh, it includes 107 new Pokémon, bringing the total up to 493. Pokémon Platinum includes for the first time in the 4th generation, the Battle Frontier which can be played on and off-line, make Poffins on-line. Players can collect badges, challenge the Elite Four, and become the ultimate Pokémon master.

The game continues the basic idea of previous Pokémon games - the player, a new trainer, sets out on a quest to catch every known Pokémon and defeat the Pokémon league. Along the way, the player will attempt to foil the plots of the evil organization, Team Galactic, who seek to use a trio of legendary Pokémon to awaken a sleeping titan with the power to control space. There are many sidequests and other activities along the way, the Battle Frontier, expanded on-line options, downloadable content via Mystery Gift, a brand new GTS with the option to receive notifications of completed traded over the Wii, record battle videos, the option to submit one's Pokémon party data for others to see and the Distortion World, which defies the laws of gravity and contains Platinum's mascot, Giratina.

The core Pokémon series features an RPG turn-based battle system. Each monster can learn up to four attacks. In a single turn, the two opponents select their attacks, and the one with the higher Speed attacks first. The amount of damage is influenced by the Attack and Defense stats. In the past, attacks were automatically classified as Physical or Special based on their elemental type. In Diamond, Pearl, and Platinum each attack can be individually categorized, so attacks which use natural elements are Special, and those which use simple force are Physical.

The Pokémon Contests from Ruby and Sapphire return, with many new features. In addition to the attack performance, where the player must try to impress the judge with flashy moves, players will also dress up their Pokémon and dance in time to music. Platinum, as well as Diamond and Pearl, also bring back the real time system from Gold and Silver, where day and night are reflected in your game. Some Pokémon are only catchable during certain times.