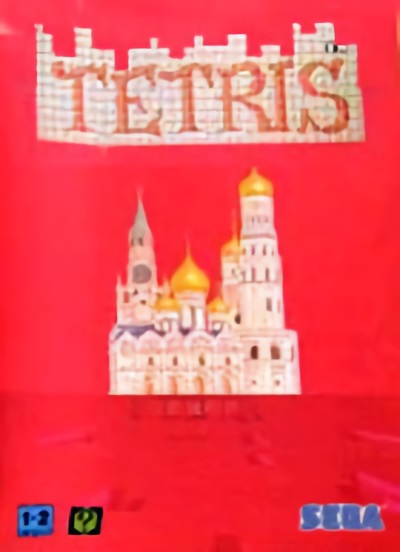 Tetris is a 1988 arcade game developed and published by Sega for Sega System 16 arcade hardware. It is a derivative of an earlier Tetris game, created by Alexey Pajitnov for Soviet Elektronika 60 terminal computers in 1984. Though Tetris is a Russian invention, the Mega Drive version was officially released only in Japan.

The System 16 version of Tetris does not add anything to the original formula, but at the time was the best looking version of the game available. If the player gets a tetris (i.e. he/she clears four lines at once), the background will change.

Complications regarding dealings with the then-communist regime of the former Soviet Union meant that during the mid-to-late 1980s, a number of companies from all over the world claimed to have the rights to Tetris. Tetris had been a puzzle game created by Alexey Pajitnov and subsequently sold to the Soviet government for a planned ten yearsin around 1986.

The Soviets marketed Tetris to export markets via an organisation called "Elektronorgtechnica", typically shortened to Elorg, and from 1988 onwards began to take an interest in contracting licenses for the game for non-Soviet markets. Prior to this, numerous versions of Tetris had been "unofficially" licensed and sub-licensed by British software house Andromeda, who had in turn bought the rights to a version of the game found in Hungary. Mirrorsoft and Spectrum HoloByte had published versions of Tetris in 1987 and 1988 respectively (under license from Andromeda), and there had been many unofficial knock-offs and clones for a variety of systems prior to these dates.

Elorg signed three deals, one allowing Atari Games to make arcade versions of Tetris, another allowing Bullet-Proof Software (BPS) to create home versions in Japan, and a final deal with Nintendo, which covered home console and handheld versions in the West. Most famously, a deal between BPS and Nintendo resulted in the iconic Game Boy version of Tetris being released in 1989.

In other cases, the relationship was not as clear cut - Atari Games' attempt to port its arcade version of Tetris to the Nintendo Entertainment System (via its home console division, Tengen) resulted in a legal battle which Atari Games would lose. Since 1996 onwards the license has been held by the aptly named The Tetris Company, which has handed licenses to numerous publishers over the years.

While Atari Games held the rights for arcade versions of Tetris, their business was based primarily in the United States. Sega of America re-resentitive Steve Hanawa "discovered" the game on behalf of the company and a deal was made for Sega to produce and market their own versions of Tetris for the Japanese arcade market. This led initially to a Sega System 16 version, also in 1988, with other variants of Tetris to follow.

Sega's version of Tetris was a phenomenal success in Japan, prompting multiple extra versions of the game - one for Sega System E hardware, and perhaps most bizarrely, versions for Taito's B-System and H-System arcade boards in Japan. The B-System versions were released as upgrade kits for Taito's Nastar and Master of Weapon; the H-System version appears to have been sold on modified boards that previously held Taito's Go for the Gold (released overseas as Recordbreaker) rather than as an upgrade kit.

Less successful was Sega's attempt and bringing this version to their own home system, the Sega Mega Drive. Much like Tengen's NES version, sales were blocked in Japan, likely this time by BPS, and it is thought that as little as only 10 cartridges were ever produced. It is one of the few Mega Drive games which Sega actively pretends did not exist, and what few copies survive are extremely rare collector's items, being sold in auctions for up to US$16,000 ((in)famously a signed copy was once put up US$1,000,000,000). Unlicensed copies of the game are far easier to find, however.

The Mega Drive release is curious as while it credits Tengen and Elorg as it probably should, it also credits Mirrorsoft. Either way, as Sega had full authority over arcade versions, the Sega Mega Drive port was brought to Mega-Tech hardware in 1989 with no problems. There is the potential that a planned Mega Drive version of Flash Point may have suffered a similar fate.