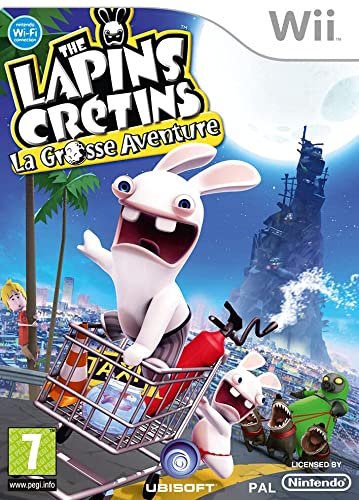 Rabbids Go Home is the fourth entry in the Raving Rabbids series. Unlike the previous games, which were mini-game compilations. The Rabbids, now living in "our" world, surmise that their home is the Moon. They decide to travel there by the only way they know how: building a large pile of junk so high that they will be able to climb up to the giant orb in the sky. In order to get the junk, the Rabbids travel through various urban environments in a shopping cart, collecting as much random stuff as they possibly can while avoiding an increasingly hostile human populace.

The player controls the shopping cart as the Rabbids move through each level. While holding down A, the cart picks up speed, but at the cost of losing control. When blue sparks appear under the cart, the player can press the B button to perform a boost, which allows the cart to jump over across gaps and other obstacles using ramps, or smash larger items into more grab-able pieces. The player can also yell at enemies, which either destroys them completely or knocks much of their clothes off. The player uses these and other moves to navigate through cities, shopping malls, office buildings, hospitals, and many more environments. The game includes a very eclectic licensed pop soundtrack as well as multiple ways to customize the Rabbids.