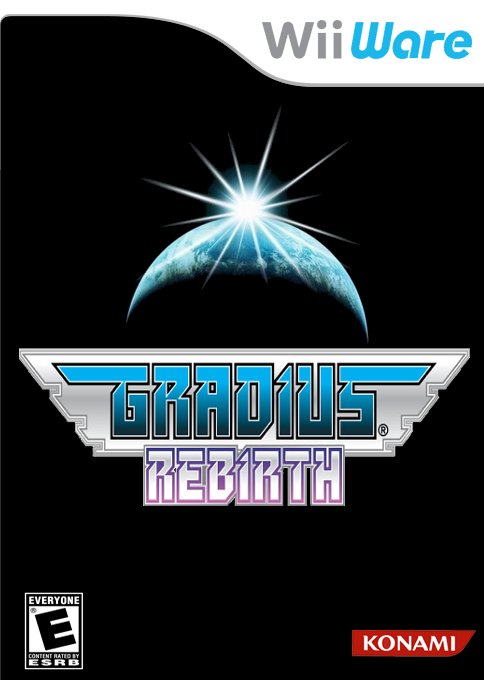 Gradius ReBirth is a part of the ReBirth series from Konami on the Wii, which includes old-school revisits to the Contra and Castlevania franchises. Like the other ReBirth titles, this game is also a throw-back to the 16-bit era, and takes inspiration from various titles in the Gradius franchise, including the Nemesis and Lifeforce titles.

In the "Gradian Year 6664," the planet Antichthon (part of the Gradian Empire) becomes suddenly quiet. The mother computer of Antichthon has been taken under the control of a group called the Bacterians. At this time, the Gradian Government deploys James Burton and the Vic Viper to attack the Bacterians.

Once again, players jump into the series mainstay ship, the Vic Viper, and head out in side-scrolling shoot-em-up stages to to battle hoards of deadly aliens and massive bosses. As is typical of the series, the weapon upgrade system remains intact. There are five stages and five ships to choose from, as well as two different modes. There is a Standard gameplay mode and a Score Attack mode. In the former, there are unlimited continues, and in the latter, players are given one life to rack up as high a score as possible. Score Attack mode is also linked to an online leaderboard.

Besides an online leaderboard, Gradius ReBirth also contains an option for players to record and play back their gameplay.