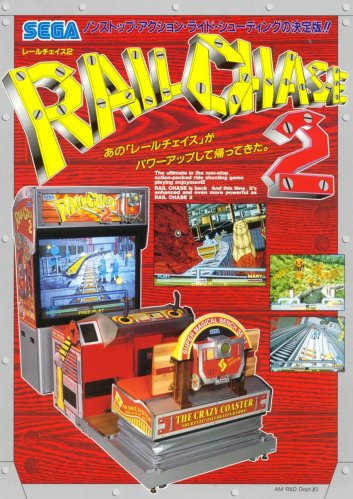 By GambierBae : February 7
Rail Chase 2 is the sequel to Rail Chase and was released for Sega Model 2 hardware in 1994. Like the original Rail Chase, the game features a pneumatic "Magical Bench Seat", which tilts and rocks with the in-game action to immerse players in the game.

The year is 1938. Journalist Flint Rickman is investigating the sudden disappearance of Mary Bates, a prominent scientist. He discovers that she has been kidnapped by the evil EKKL empire, who are holding her in their base and forcing her to develop weapons so that they can conquer the world with their military might. Flint sets out to rescue Mary, but when the empire's weapons plant explodes, the pair are forced to escape EKKL in a runaway rail car!