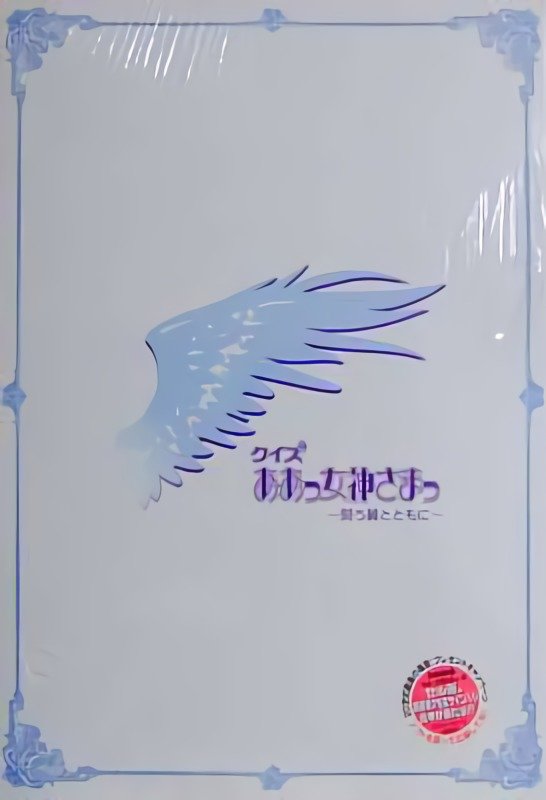 By GambierBae : June 8
Quiz Aa! Megami-sama: Tatakau Tsubasa to Tomoni is a quiz game for the Sega Dreamcast and Sega NAOMI arcade platform, based on the Aa! Megami-sama manga series.

As just about any anime fan knows, video games based on anime usually turn out to be cheap cash ins - hiding a mediocre game behind a popular license. Although there are a few exceptions, this holds true for about 90% of the games based on anime and manga. Now, Sega has released a game based on one of my personal favorite series, Ah My Goddess. (Or Oh My Goddess, if you prefer.) Based on an arcade game that was released only in Japan, Quiz Ah My Goddess is mediocre at best, and only diehard fans of the series should seek it out.

For those of you not familiar, this game is based on the comic and anime by Kosuke Fujishima. It tells the story of Keiichi Morisato, a young college student who is a bit of a loser, and has never had much luck with women. That all changes the day he dials a wrong number, and reaches the ''Goddess Technical Support Line''. In moments, he meets Belldandy, a gentle deity who has come to grant Keiichi one wish. Thinking it's a joke, Keiichi wishes that he could have a girl just like Belldandy with him forever. Belldandy grants his wish, and the two are now destined to be together forever. Eventually, Keiichi has two more unexpected house guests in the form of Belldandy's two sisters - the sexy and mischievous Urd, and the bratty, but scientifically brilliant, Skuld. The series follows Keiichi's misadventures living under the same roof with these three goddesses, and trying to find a way to admit his true feelings of love to Belldandy.

Okay, so it's not the best material to base a video game on. Sega obviously understood that, so they took a more alternative route with the game. Quiz Ah My Goddess is exactly what the title says - a trivia game.

Since I hold very little knowledge of the Japanese language, I'm not entirely up on the game's storyline. But, in this game, you control Keiichi as he makes his way around Nekomi Tech, the college that he goes to. There are six levels that take place at different areas of the campus. You move from place to place via a cursor on a map. When you enter the place you've selected, you encounter one of the characters from the series. That character asks you a set of questions. If you answer correctly, you get a gem. Collect a certain number of gems, and you move onto a ''boss'' battle. In the boss battle, you must choose a category that you would like the questions to revolve around. ''Defeat'' the boss by answering their questions correctly, and you move onto the next level.

The questions in this game are varied, and done in a multiple-choice format. Some of the questions are based on the series that inspired the game, while some are general trivia questions. In the game's option screen, you can set the number of questions in order to move on. Each time a question is asked, you have a time limit in order to answer. You can also adjust the amount of time given in the options. As you can tell, this game relies very heavily on Japanese text, so you really need knowledge of the language to fully get the most of the game. (Fortunately, I had a friend with better understanding of the language than I who helped me out.) If you answer incorrectly, or don't answer at all, you lose one of your life cards. Lose all your life cards, and the game is over.

In-between the quiz segments are cinema sequences that move the story along. Unfortunately, these cinemas are done with the game's graphic engine. Nothing wrong with that, but I'd prefer it if the cinemas were animated, and done by the same studio that worked on the anime. However, the dialogue during these scenes is performed by the actual seiyuu (voice actors) from the cartoon, which is a nice touch.

The graphics are, for the most part, very good. They faithfully re-create Kosuke Fujsihima's beautiful character designs in 3D. Although they can never be as good as their 2D anime counterparts, I commend Sega for their effort, as these are probably the best 3D models of the characters I could imagine. The backgrounds are good, but somewhat boring, since the entire game takes place at Keiichi's school. There are also some nice hand-drawn portraits of the characters next to the text box whenever that character is speaking.

The sound is a mixed bag. The music is nothing to write home about, and won't stick out in your mind. The highlight in the sound department is the voice acting. As I said before, all the characters are voiced by the same actors who play them in the anime. Unfortunately, only the cinema scenes in-between the levels feature spoken dialogue. The quiz segments are text-only, except for an occasional brief comment from one of the characters. It'd be nice if they had the characters actually ask you the question in dialogue. But, with the vast amount of questions this game holds (the back of the box promises over 6,000), I guess that'd be impossible.

Fans of the series will get the most enjoyment out of this game, as just about every major character from the series appears at least once. Not only that, there is a new character created especially for the game. However, the fun of seeing these great characters coming to life in a video game gets old pretty quickly. And that's when you begin to realize just how boring this game really is.

Despite the nice graphics and the great anime license, this game pretty much amounts to nothing but multiple choice questions with brief cinema scenes thrown in-between. Sega didn't even see it fit to throw in any extra game modes. Pretty much, once you've played it once (which doesn't take very long), there's no real reason to play it again, unless you want to see all of the questions that you'll be asked. The game gets old very quickly. There's no real game play, and no action-oriented mini games to break up the monotony of the multiple-choice segments. All this game has going for it is the license and the great characters. I'm sure it must have been hard for Sega to come up with a game based on the Ah My Goddess universe, since it's not the most likely candidate for video game translation, but still, they could have picked something more interesting than this.

Like most anime games, this was just a cheap and quick cash in on a popular license. (I believe Sega was trying to cash in on the release of the Ah My Goddess theatrical movie that came out in Japan last year.) Ah My Goddess deserves better than this. Overall, this game is only for fans that absolutely must own every piece of merchandise spawned from the franchise. And even then, you must have a good knowledge of Japanese, or know someone who does to help you, to even play it. Let's hope if Sega decides to take another chance with the license, they come up with a game that's a bit more exciting, and has some real game play to go with the graphics.