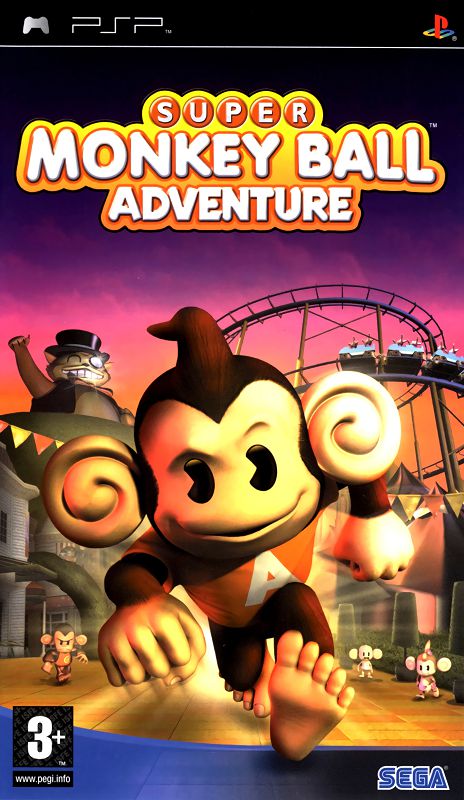 Our four heroes from Super Monkey Ball - Aiai, Meemee, Baby and Gongon - were enjoying a typical day, when they saw a flying machine crash down on a nearby island. Soon, they discovered that the mysterious Naysayers have appeared, spreading discord and unhappiness all over the island. And to top it all off, the prince and princess of the neighboring islands have gone missing on Jungle Island - if they aren't found and returned, there's sure to be trouble! Can our heroes restore order to Monearth?

Super Monkey Ball Adventure takes the monkey rolling madness of the previous games and puts a story-based spin on it. Choosing from one of the four monkeys, Players roll their way around the various islands of Monearth, talking to citizens and performing the tasks they request (such as delivering sandwiches, finding a missing baby, rescuing rare flowers, and more) to cheer them up.

Certain parts of the island are locked by 'Puzzle Gates' - these can only be unlocked by solving the puzzle stages which can be accessed in front of the gate. Each pad transports you to a different Puzzle Realm. The Puzzle Realm stages are the more familiar gameplay of Super Monkey Ball - simple looking stages where players must carefully (but quickly) roll their monkey to the finish line within the time limit.

Bananas can also be collected throughout the game - these are used as currency, and can be used to unlock new playable characters and puzzle stages. They can also be given to particular unhappy citizens. The monkeys will also learn magical chants as they progress through the game - these allow you to climb walls, set your monkey's ball on fire, use a boxing glove to attack, and more.

Also included in Super Monkey Ball Adventure are the famous Party Games - favorites like Monkey Race, Monkey Target and Monkey fight return. There's also three new games: 'Monkey Cannon' - fire monkeys at enemy towers to steal their bricks for your own tower. 'Monkey Bounce' - bounce on a trampoline-like platform with your opponents, and try to claim as many squares as possible. 'Monkey Tag' - roll around a globe and try to collect as many balloons as possible.