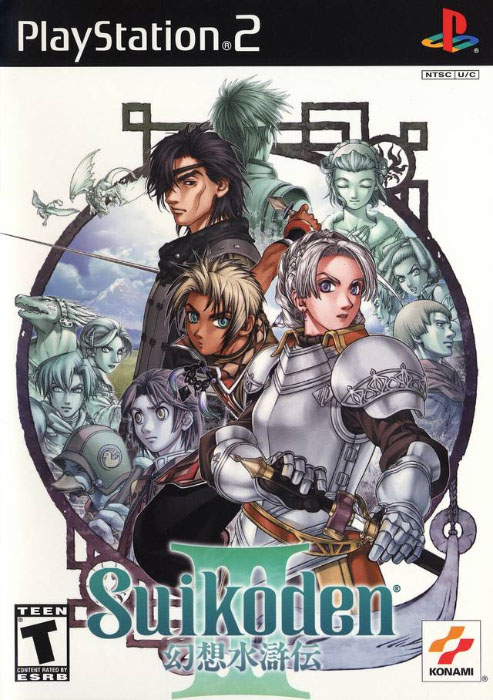 As the conflict between the mighty nation of Harmonia and the tribal inhabitants of the Grasslands evolved, a man who possessed the True Fire Rune stepped in. Called the Flame Champion, he led the Grasslands against Harmonian invasion, and eventually unleashed the power of his rune in a decisive battle, causing the death of many people on both sides. Harmonia retreated, and the Flame Champion disappeared. An uneasy truce was achieved, but the relationship between the Grasslands and the neighbor merchant nation of Zexen grew steadily worse.

Chris Lightfellow, known as the "Silver Maiden", is the captain of the Zexen Knights, commanding its forces after a truce agreement between Zexen and the Grasslands has been broken. She is increasingly dissatisfied with the Zexen leadership, and is determined to find her missing father. Hugo is the son of Lucia, the chief of the Karaya clan of the Grasslands. When he finds his village in flames, he swears revenge against the nation of Zexen and its knights. Meanwhile, Harmonia's authorities send an enigmatic mercenary leader named Geddoe to investigate rumors concerning the return of the Flame Champion.

The events of Suikoden III take place sixteen years after those described in its predecessor. The game retains many distinguishing gameplay features from the series' previous installments, including equipment of magic runes with limited spell uses instead of the more common magic points system; the possibility to recruit 108 characters (Stars of Destiny), many of which can participate in battles; customization of a castle serving as army headquarters, etc. Tactical army battle mechanics are similar to those employed in the second installment.

The game's most significant new feature is its so-called "Trinity Sight System". Instead of controlling a single main protagonist, the player takes the roles of Chris, Hugo, and Geddoe during the course of nine chapters (three per character). These chapters focus on the conflict between the Grasslands and Zexen, and represent three different points of view on the events. Afterwards the player must select the character he or she considers the principal protagonist of the game. The game also includes two optional chapters told from the point of view of another character.

In addition to leveling up and raising the effectiveness of their weapons and armor, characters can also learn skills - passive abilities that improve the their combat performance, such as parrying, dealing higher damage, acting quicker, etc. Magic spells typically take longer time to cast, which can be remedied by improving a correspondent skill. Some magic spells also have area effects, dealing damage to enemies and allies alike. The player controls six characters in battle, divided into three pairs: the leaders of the pairs are actively controlled, while their companions act according to AI routines.