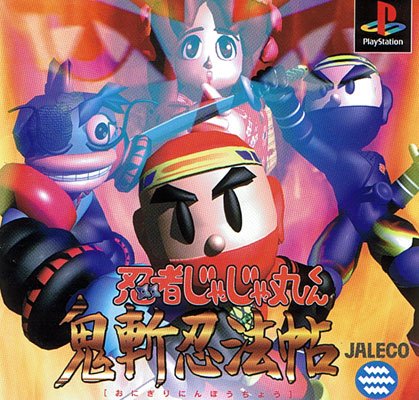 By Valek : November 24
Ninja Jajamaru-kun was one of Jaleco's most prolific franchises back in the Famicom days. The series actually began as an arcade title called Ninja-kun, released in 1984 by a company called UPL Jajamaru-kun and friends was practically everywhere in the 8-bit era, but other than the lone SFC Ninja-kun game, he was pretty quiet during the 16-bit days. Jaleco then attempted to reimagine him in 3D for the 32-bit era for the Saturn and Playstation, with the subtitle "Oni Killer Ninja Magic Scroll".

It actually looks very reminiscent of the N64 Mystical Ninja games. Like the old games, Jajamaru's main weapons are his shurikens, although he can also find a number of spells to attack all of the enemies on the screen and such Also, the Saturn version is technically an updated version, as it was released later, denoted by the "kin" after the name, meaning "gold".

It has a map screen, where little old school sprites of Jajamaru, Princess Sakura, and the Catfish pirate show up. Every few stages, you'll also get to play a level of the original Jajamaru-kun game, just to remind you of its heritage.