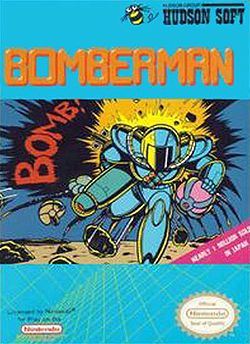 Bomberman is a robot engaged in the production of bombs. Like his fellow robots, he had been put to work in an underground compound at the center of the Earth. Bomberman found it to be an unbearably dreadful existence. One day he learned that any robot escaping from the center of the Earth and able to make it to the surface will become human. Bomberman jumped at the opportunity. Alerted to Bomberman's betrayal, large numbers of enemy characters were sent out in pursuit. Bomberman can only rely on bombs of his own production for his defense. Once there, will he really become human?