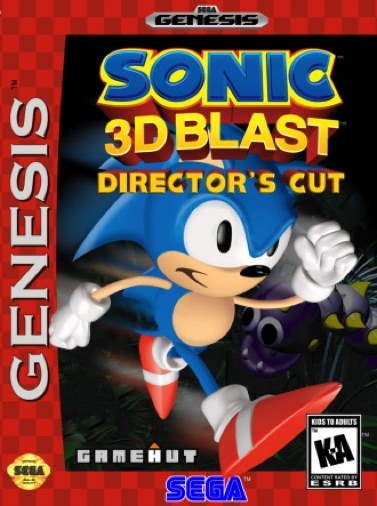 "Sonic 3D Blast - Director's Cut" is a hack of "Sonic 3D Blast" of the Sega MegaDrive made by Jon Burton, founder of Traveller's Tales and the game's original programmer.
This hack focus on adding new contents to increase the replayability and giving massive improvements and tweaks to the original game, fixing many issues that the game has been criticized for.

New Features :
- A world map has been added, allowing the player to choose their level as they progress and replay previously-cleared levels.
- Super Sonic has been added, and is unlocked when all seven Chaos Emeralds have been collected. To transform, the player must collect 50 rings, jump, then press the Spin Dash button in the air. As Super Sonic, the player has Power Sneakers, Homing Attack and Invincibility active at the same time. The player can input the same commands to cancel Super Sonic.
- A Time Challenge mode has been added, giving players a new challenge in levels that have already been cleared. In this mode, the player doesn't need to collect Flickies, but they must reach the goal in a strict time limit.
- A level editor from development builds has been added for players to play with, allowing players to add/edit/remove objects in levels how they please.
The game now saves progress via a password that the player can enter. The password system uses code originally used for the Sega Channel version of Sonic 3D.
- A completion percentage is displayed on the world map screen. To achieve 100%, the player must complete all zones, complete the Time Challenge for every Act, collect all Sonic Medals, collect all seven Chaos Emeralds and get a score of 5,000,000 points.
- The player can choose to play the original game without any of the changes.

Gameplay Tweaks :
- Sonic has been made faster to give the game more of a sense of speed akin to other Sonic titles.
- Sonic now makes turns faster.
- The camera extends further when travelling at high speed.
- Running into walls won't cancel Sonic's momentum, allowing him to climb staircases faster.
- When hit, Sonic only loses one Flicky at a time as long as he has at least one ring. If Sonic is hit without rings, he will drop all his Flickies. If hit without rings or Flickies, he dies.
- Flickies now act as a shield against projectile attacks.
- When Power Sneakers are in effect, Sonic gains a state of pseudo-invincibility where enemies and hazards simply make him bounce back without taking damage, making Power Sneakers safer to use.
- The camera now tries to show both Sonic and Eggman during boss fights to make it easier to see the boss.
- Sonic Medals no longer act as a means of giving the player a Continue. They are instead permanent collectables that add to the player's completion percentage. They also award 1,000 points when collected.
- The player can now only get one Chaos Emerald per zone. As Gene Gadget Zone and Panic Puppet Zone normally do not feature Tails or Knuckles, they have been added to those zones to give the player a chance to get the Chaos Emeralds tied to those zones.
- A Crab Badnik that was cut during development has been added back into the game. It can be found pacing back and forth in Rusty Ruin Zone and releases a Red Flicky when destroyed.
- Various enemies and objects have been given bigger hitboxes to make them easier to interact with.
- Miscellaneous bug fixes such as Sonic no longer sliding through moving platforms.

Graphical Tweaks :
- Sonic has been given a lighter shade of blue for consistency with newer games like Sonic Mania.
- When a Flicky is loose, its icon will bounce on the Flicky counter to alert the player.
- If any loose Flickies are offscreen, flashing Flicky icons will appear on the sides of the screen to direct the player.
- The score and time are now displayed on the HUD. If too many sprites are on-screen at once (e.g. when Sonic loses a lot of rings), the game hides the score and time to give priority to the extra sprites until there is enough VRAM space.
- Green Grove Zone has been given a new palette to make it look closer to levels like Green Hill Zone.
- The waterfall in Green Grove Zone has been given a new shade of blue so Super Sonic's palette does not conflict with it.
- The Special Stages have new palettes that match the zone they are accessed from.