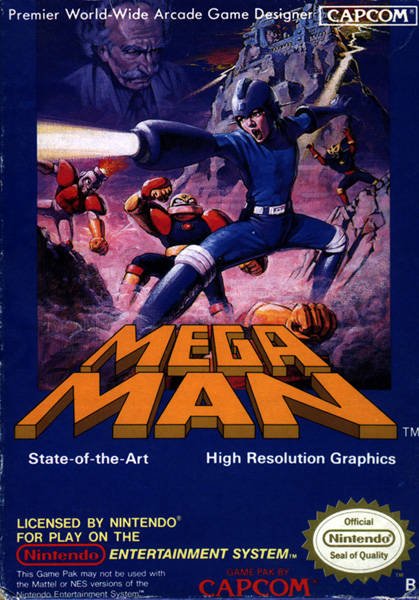 In the future city of Monsteropolis, the use of robot labour has helped civilization grow more than ever before. At the forefront of this technology is Dr. Light and his assistant Dr. Wily, who are commissioned to build six robots to handle a variety of specific tasks. They are named Bombman, Gutsman, Iceman, Cutman, Elecman, and Fireman in reference to their individual prime functions. Dr. Wily, however, has bigger plans and chooses to take control of the robots and let loose destruction in a bid for world control. Dr. Light fights back with the best tool he has, an experimental human-like robot, Rock aka Mega Man, who had been tested to perform cleaning duties. Now properly armed, it's up to Mega Man to take on the maverick robots, fight his way into Dr. Wily's castle, and end this madness.

Mega Man is a side-scrolling platformer. Mega Man has the ability to jump and fire his weapon. He must travel to the levels of the six robot masters and defeat them in combat. By doing so, Mega Man is able to acquire their power for his own. These powers can then be used interchangeably with his main weapon and target the weaknesses of specific enemy bosses. Additionally, some hidden areas of the levels can only be accessed by using certain captured robot weapons. A special Magnet Beam ability can also be found which can be used to create steps.