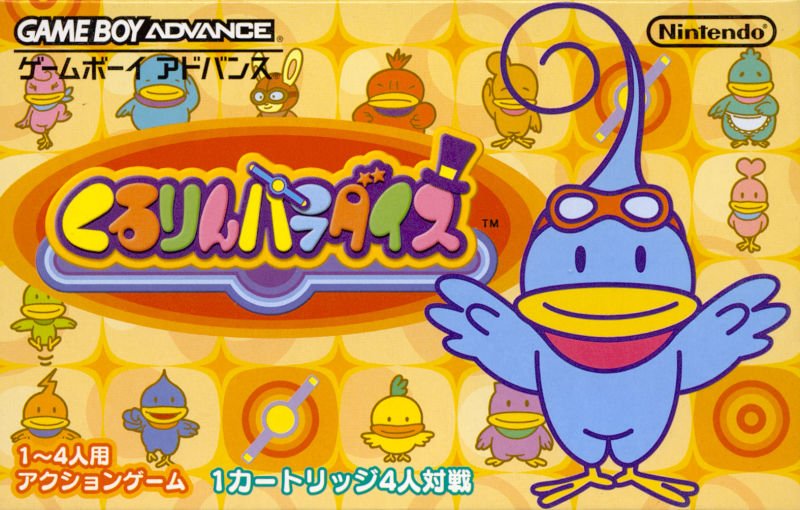 By GambierBae : February 23
Kururin Paradise is the sequel to the GBA launch title, Kuru Kuru Kururin. In this game, Kururin and his family see an advertisement for the circus, which takes place at 6:00. Kururin's family arrive there on time, but Kururin is late, and when he gets there, everybody is missing! It's up to Kururin to search across the land for his missing family using his faithful helicopter, the Heririn. As in the first game, Kururin must navigate his way through fairly narrow mazes, trying not to hit the walls. Three consecutive hits, and the Heririn is destroyed, and you must start the stage again.

Paradise is vastly improved from the original game. It is now possible to find hidden keys in the levels, which open up locked doors, allowing for branched paths in the world map. Certain paths also lead to boss encounters, which take the form of an addictive mini-game including, but not limited to, lawn mowing, gathering stars, flying Kururin himself through clouds, and hopping across a path dodging helicopter blades. If you beat the boss, these mini-games are then added to your mini-game library, where you can play them against up to three friends using only one cart.

The game also features twelve toys built in that can be accessed by selecting one from a menu, then turning your GBA off, then on again. Most of them are fairly useless or incomprehensible in Japanese, but there are a couple of interesting ones, like the love tester, the musical note player, and the memory match game.

A huge thanks to DigitalZero Domain for this translation. https://www.romhacking.net/translations/1170/