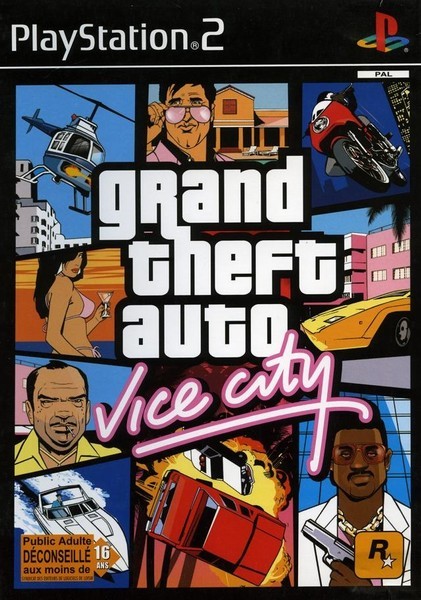 Tommy Vercetti is a gangster who just got off a fifteen year prison sentence for not squealing on his friends. Because he didn't rat out his "family", Tommy's sent to work with Sonny Forelli, his old boss. Sonny gives him an easy drug job, but everything goes wrong, and Tommy loses everything. Upon returning to Sonny, he gets mad and wants his money back. Unfortunately, everybody in Vice City, from gangsters and Cubans to bikers and politicians are in his way, and it's up to Tommy to clear a path.

Grand Theft Auto: Vice City offers the same free-roaming driving and action gameplay style as its predecessor, but in a new setting based on the city of Miami. The game includes all the features of the previous installment and builds upon them. There are new cars in the game, reminiscent of typical vehicles from the 1980's. Some cars are earlier models of the vehicles from GTA III. A few missions also involve the protagonist navigating a boat.

New to this installment is the ability to drive motorcycles. Tommy can drive a variety of two-wheeled vehicles, from huge Harley-esque bikes to dirt bikes to a standard motorcycle. Flying is also a bigger part of the game, as the player can fly small planes and helicopters, traveling from area to area, landing on helipads on top of towering skyscrapers.

Firearms are for the most part the same as in GTA III, and melee weapons have been added to the protagonist's arsenal. Tommy can use riot batons, crowbars, and a few others. Activities outside of the missions (driving taxis, delivering sick people to hospitals, firefighting and playing a vigilante policeman) are available as well.

To effectively capture the mood of the 1980s, the soundtrack has been altered to fit the time period. Players will listen to an estimated nine hours of music (nearly three times the amount featured in the previous game) across ten radio stations. The eclectic mix features such noteworthy titles as I Ran by Flock of Seagulls, The Message by Grandmaster Flash, You've Got Another Thing Coming by Judas Priest, and Out of Touch by Hall & Oates.