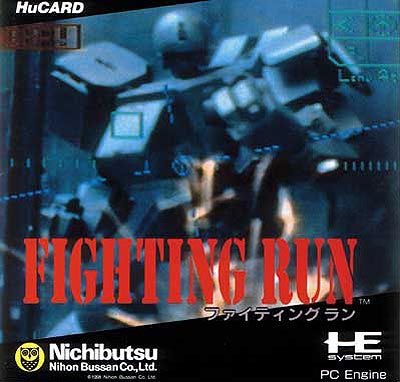 By Apharel : November 23, 2018
Fighting Run is an action game by Nihon Bussan that features an unusual mix of racing and fighting. The player takes control of a humanoid biped robot engaged in a series of deadly races against other opponents. But these races have a twist - each racer can attack the opposing player in order to win the race and score points. In single-player mode, the player first needs to choose a track and an opponent. Then points need to be allocated to increase various abilities, from Speed, Power to Armor. Then the race is ready to go - each racer can freely move around the track, hit each other or use special attacks collected along the way (such as lightning bolts, grenades and so forth). Each robot also comes with a life bar and the race is over as soon as it reaches zero. Additionally, Fighting Run features a versus-mode where two players, or two AI controlled opponents, can race against each other, as well as a tournament-mode where eight robots and their pilots race (two at the time) for a golden trophy.