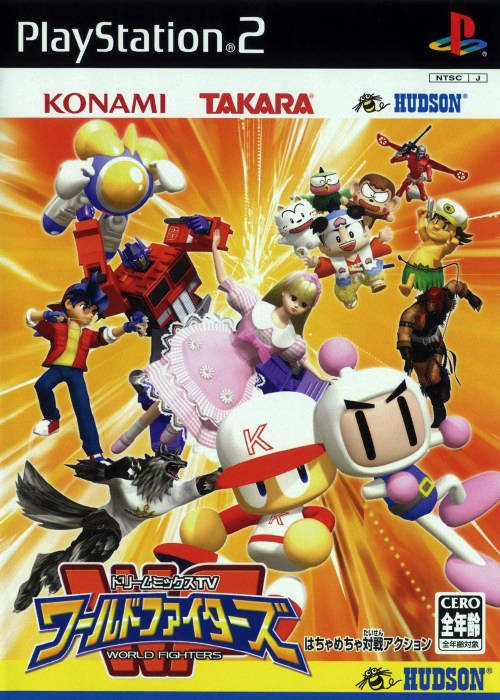 By Luigeek : April 16
A television program is facing low ratings and they are told by their TV network that they are on the verge of being canceled. In order to hold onto their jobs, the people in charge of the program decide to hold a fighting brawl tournament involving some of japan's superstars from the licenses of Hudson, Konami and Takara.

Dream Mix TV: World Fighters is a side-scrolling 2D platform fighting game displayed on a 3D world, similar to Super Smash Bros. Between two and four players are selected to compete against one another in the arena.

The goal of the player is to damage and destroy the other players by impacting them with attacks and special abilities, the specifics of which vary by the character selected. A group energy bar showing all characters individually on a bar is displayed at the bottom of the screen.

Invited to this cross-over tournament are: Takahashi Meijin aka Master Higgins (from the Adventure Island series), White Bomberman (from the Bomberman series), Yugo (from the Bloody Roar series), Momotaro and Bimbogami (from Momotaro Densetsu), Sengoku Manjimaru (from Tengai Makyo II: Manjimaru), Simon Belmont (from the Castlevania series), Twinbee (from the Twinbee series), Power Pro-kun (from Jikkyo Powerful Pro Yakyo '94), Solid Snake (from the Metal Gear series), Moai (from the Gradius series), Convoy aka Optimus Prime and Megatron (from Transformers), Microman (from Micronauts), Tyson Granger (from BeyBlade), Licca-Chan (a popular dress up doll franchise) and Aska (from the game Cy Girls).