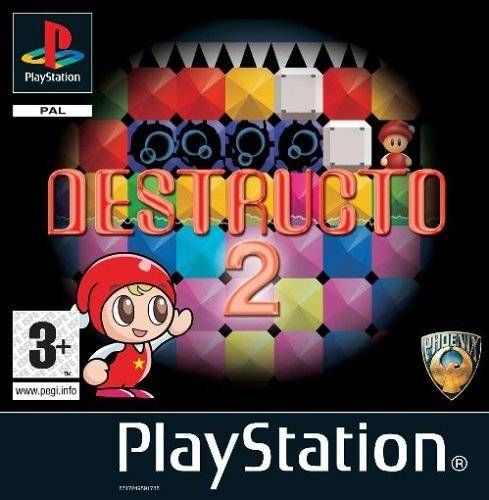 Destructo 2 is a simple color-matching puzzle game similar to Mr. Driller, originally released as part of a budget series in Japan. The main objective is to guide a cartoon character moving through an ascending pile of multicolored tiles, pushing the available blocks to create clusters of the same color. Groups of four or more tiles of matching colors can be removed by punching one of the connected blocks, with the vacant space being occupied by the falling stacks on top. The descending tiles that end up rearranged in new color clusters are automatically eliminated and give combo points.

As the tiles accumulate on the screen, the water level at the bottom starts to proportionally rise, receding when enough blocks are destroyed. The health meter for the main character is displayed below the gamefield, decreasing when suffering injuries from bomb explosions or drowning. The character also dies after being crushed against the top by the blocks. Power-ups and other items can be found inside containers that randomly appear on the pile, that have to be broke open with three punches to reveal their contents. The blue items give bonus points, eliminate all the tiles of a particular color, lower the water level and help in other ways, while the red items do the opposite and have to be avoided.