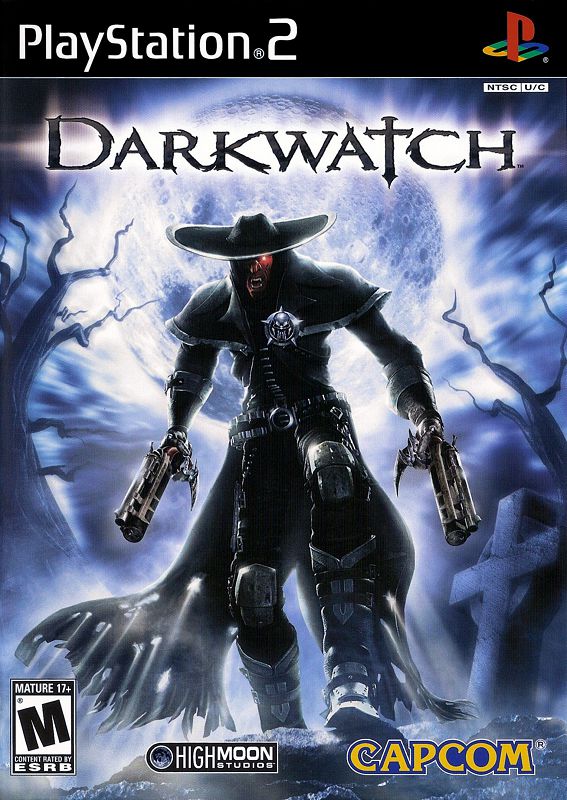 The Darkwatch is an ancient organization hell-bent on destroying evil in the world. They have just captured the vampire lord Lazarus and are transporting him back to headquarters for questioning, when an outlaw tries to rob the train and instead of finding riches releases Lazarus from his hold, but not before the outlaw is bitten by the vampire lord. As Jericho Cross, the former outlaw and now the newest member of the Darkwatch, you must find and kill Lazarus, lest you turn into a full-blown vampire yourself.

Darkwatch is a first-person shooter set in the Wild West with supernatural beings. Fight your way through reapers, undead riflemen, banshees and other creatures using Darkwatch weaponry that doubles as melee weapons, such as a revolver, two-fisted pistols, a crossbow (with dynamite attached to the bolts) and a Rail Rocket. You will also find dynamite along the way to throw at the enemy and to destroy barricades. Along with conventional weapons, Cross will acquire vampire powers of good or evil nature that you must choose in the story. If you decide to be good, then you receive powers such as Silver Bullet that increases your shots with holy fire or Vindicator that calls down chain lightning on your enemies. If you choose to be evil, you will receive Blood Frenzy that makes melee attacks supernaturally powerful and Soul Stealer, which sucks the very souls from distant enemies. Regardless of good or evil, you will always have Blood Shield (protection from losing health), Vampire Jump (for those hard to reach areas) and Blood Vision (causes enemies, weapons and other important objects to glow). With every creature killed, there will be at least one Blood Cloud and sometimes more to replenish your health and restore your Vampire Powers.

In single player you can choose from story mode (follow the story of Jericho Cross one chapter at a time) or Gunslinger mode (replay any level unlocked in story mode as either evil or good). At the end of the level, you see your number of kills and accuracy percentage, which, if it is good enough, will unlock some movies and concept art.

Play on-line over Xbox Live with up to 16 players or up to 4 people in split-screen mode. Multiplayer matches include Death Match, Team Death Match, Capture the Flag, Soul Hunter (fight to collect Blood Clouds and be the first to fill your Blood Bar) and Team Soul Hunter. You can adjust the settings for each match regarding the game type, map in which you wish to play, total time play, score limit and kill limit.