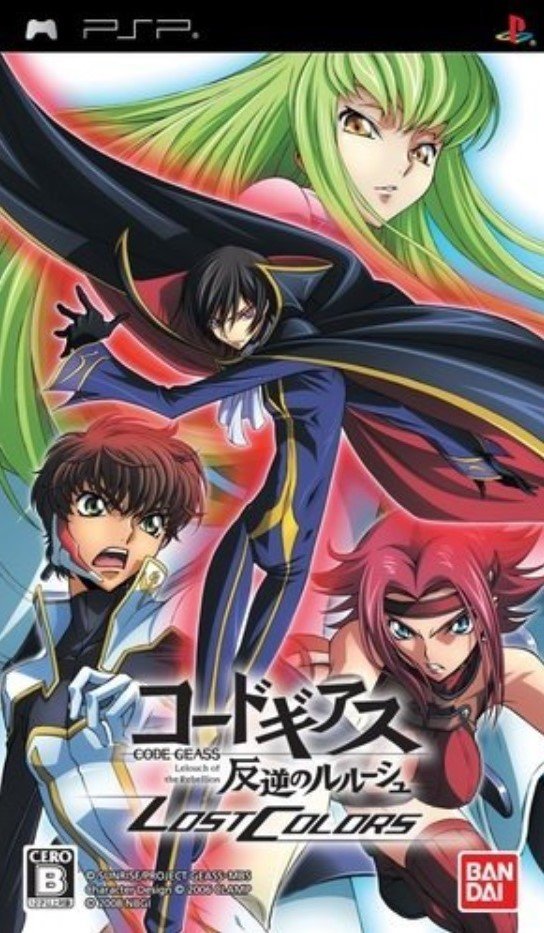 By Nanoman : April 29, 2020
Code Geass: Lelouch of the Rebellion - Lost Colors is the second video game developed about Code Geass. It was developed for the PlayStation Portable and PlayStation 2, and released in Japan on March 27, 2008. It is a visual novel game which follows a new protagonist named Rai, who suffers from amnesia. He has a Geass ability similar to Lelouch's, but activated by voice.

In Code Geass: Lost Colors the video game there are several different endings and clips of Lelouch that involves the main character Rai. In the first scene of the game, Lelouch, along with Milly, were the first people Rai meets when he enters the school before he went unconscious. After Rai woke up several days later, Lelouch immediately had doubts about him and was shocked that Milly made him a student, but was reluctant to accept him.

On day 11 on midday, Lelouch spotted Rai with Nunnally on the rooftop of Ashford Academy talking about Euphemia and revealing themselves of their royal birthright. With their identity exposed, Lelouch was prepared to use Geass on him and erase all of his memory, but Nunnally prevented him from doing so and trusted him with their secret. This prompted Lelouch to reveal their identity as Britannian royalties, including their friendship with Suzaku after being sent to Japan . Fearing that he would cause trouble and betray Nunnally's trust if his memory was ever returned, Lelouch was requested to kill him with his Geass but refused as it would make Nunnally sad.

If the player decides to use Rai's Geass on Suzaku to make him join the Black Knights, Lelouch becomes angry, having wanted Suzaku to join him of his own accord, and uses his Geass to put Rai into an eternal sleep, resulting in a game over.

If the player follows the Blue Moon route and make Nunnally and Rai fall in love, Lelouch will be reluctant to accept their relationship and will be with them during their first date, watching them closely as they go visit the Ashford Academy's garden.

If the player chooses to pursue Lelouch as a best friend, ending scenes will vary depending on which route the player is on. For example, in the Geass route Lelouch and Rai both learn of each other's past and identities though they ultimately cannot be together, Lelouch learns that Rai is all too much like himself and understands him because of it. The Black Knights route involves Zero asking Rai to join him permanently in his fight against Britannia. Rai refuses, interpreting the words as an order, upon which Zero finally reveals his true identity as Lelouch and asks the player to join him not as a pawn, but an equal and true partner.

In the Geass route ending scene, after Rai sealed himself within the Thought Elevator and uses his Geass to erase his existence, a scene shows Lelouch seeing a spark of light flowing through the sky from out the window in sadness. The next scene later shows the student council preparing for the school festival. When Lelouch talks about Milly's performance, he suddenly speaks out to someone else. Milly questions who he was speaking to, which Lelouch doesn't know but felt like he knew someone was missing.