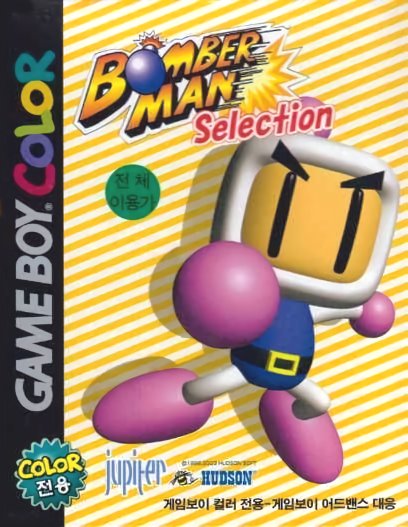 By Perichor : February 4
Bomberman Selection is Bomberman Collection, minus Bomberman GB 2 and Super Game Boy support, but plus Game Boy Color support (in fact, it's Game Boy Color only) and a very shaky English translation of Bomberman GB's Japanese text. Bizarrely, a Korea-only release at the tail end of GBC's lifespan.

Bomber Boy:
Atomic Punk, which was released as Dynablaster in Europe and Bomber Boy in Japan, is a game from Hudson Soft's Bomberman series.

The game offers two single player and two multiplayer modes. The single player mode called "Game B" has the classical Bomberman gameplay, while the mode "Game A" introduces several variations. The levels in Game A are divided in nine areas, which can be accessed in any order from a world map. Depending on the time taken to finish a level and the number of blocks destroyed, the player gets a certain amount of gold, which can be used to buy power-ups (called "panels" in the game) in shop, which in term is accessed from the map. Power-ups allow, for example, to revive Bomberman when he dies in a stage or to increase the length of an explosion. Before entering a new area, the player chooses which panels to use in order to complete the area.

Bomberman GB:
Bomberman is on the hunt for treasure and must bomb his way through 48 levels of caves and beasts. Use Bomberman's bombs to create paths through the caves to the exits, while dodging a range of different enemies, each with a different ability to stop Bomberman. After completing a certain amount of levels and beating the end of area boss, Bomberman will learn a new ability, such as more powerful bombs, using a whip to move the bomb into place, and many more.

Apart from the Story mode, you can also play classic 4 player Bomberman using the link cable.

This game is only compatible with the GBC MAME and mGBA emulators.