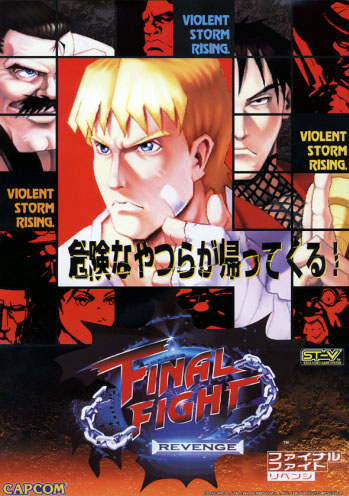 Final Fight Revenge features ten playable fighters, all of them characters from the original Final Fight. Cody, Guy and Haggar were the player characters from the original game, while El Gado, Poison and Andore were enemy characters, and Damnd, Sodom, Edi E., and Rolento were end of level bosses. Guy, Sodom, Rolento, and Cody were previously featured in Capcom's Street Fighter Alpha series and some of them use the same special moves they had in the Alpha series in Revenge. Poison would later appear with similar special moves in Ultra Street Fighter IV.

The single-player mode consists of matches against six computer-controlled opponents and a final match against a zombiefied version of Belger, the final boss from the original Final Fight. This is followed by a character-specific ending and a closing credit sequence showing Zombie Belger performing the iconic dance moves from Michael Jackson's Thriller video. The Zombie Belger is not a playable character in the game.