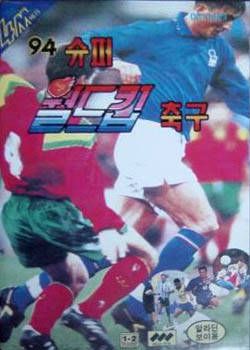 By Nanoman6666 : January 28, 2018
94 Super World Cup Sccer is a Korean-made football (soccer) game. Despite its title, it does not accurately reflect the team roster of the 1994 World Cup: there is, for example, no Brazil among the 24 teams available for selection. There is also no possibility to actually play through the competition; players can only opt to participate in a single match (against each other or computer AI) or a series of penalty kicks. There are no individual player statistics, substitutions, or any other features beyond playing the match itself. Active team members are selected automatically, and the player can only pass, kick, or perform a tackle when playing in defense.