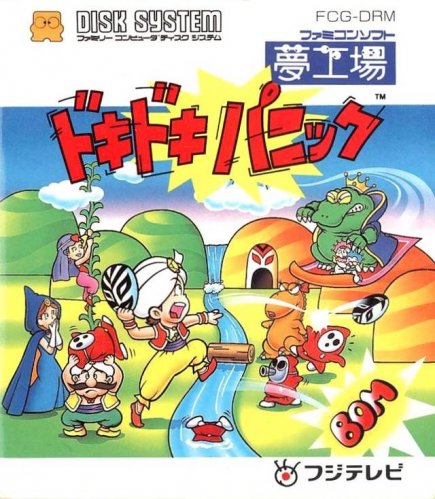 By Tanuki78 : January 24
Far beyond the skies, there lies a peaceful dream land called Muu, where dreams determine today's forecast - pleasant dreams mean it will be a sunny day, but bad dreams mean that storms are brewing. One day, to make sure that they would have sunny days, the people of Muu invented a device called the Dream Machine, which would manufacture pleasant dreams for all. But, a mischievous monster named Mamu rigged the Dream Machine, changing it to produce monsters. Mamu, however, had one weakness - he absolutely hated vegetables. So the people of Muu hurled as many vegetables as they could into the monster and eventually he was buried. And the people of Muu lived happily - not to mention dreamily - ever after.

But the story doesn't end there - for one day, a monkey named Rusa discovered a book containing this story and gave it to two twins, Piki and Poki. After a while, however, they started arguing. Push came to shove until eventually it happened - they ripped the last page from the book. In an instant the twins were caught by a mysterious hand and sucked in - but luckily for them the twins' older brother Imajin arrived in time to see the hand disappear back into the book. Now he, his sister Lina, and their parents must get them back!

In Yume Kōjō: Dokidoki Panic, a single player takes control of the four members of the family who were the mascots of Fuji Television's Yume Kōjō '87 event through seven chapters full of platforming challenges, bosses, bonus money, the always helpful heart, and invincible star, plus bombs and magic lamps. After each level, collected coins can be used in a bonus game to collect extra lives. After a family member has defeated Mamu, it's up to another one to bust through. When all four have defeated Mamu, the game is finished and Piki and Poki are saved.