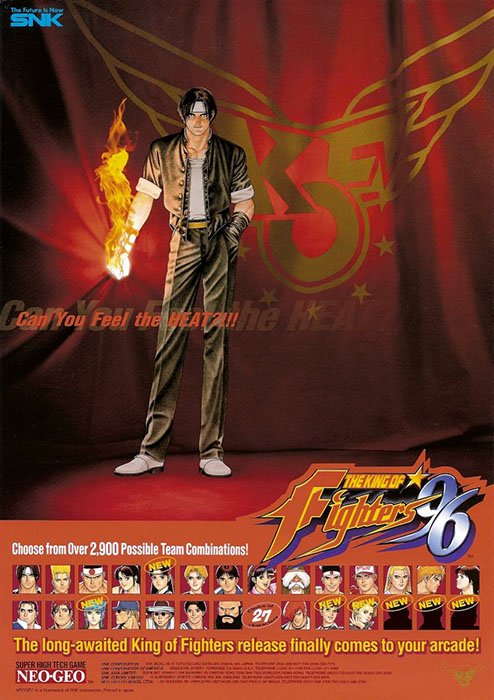 SNK's flagship series returns for another year. Many of the changes in this year's KOF release come in the form of improved graphics, sound effects, music and totally redone character sprites. The gameplay of the system has been altered with the addition of "Rush" multi-hit combos and new moves for practically every character. The storyline of the series receives heavy focus in this release with the Orochi Saga swinging into high-gear.

The King of Fighters '96 has 27 regular characters plus 2 boss characters (who can be unlocked with the use of a code). Newcomers to the tournament include Mr. Big from the Art of Fighting series, the bosses from Fatal Fury (Wolfgang Krauser and Geese Howard), and completely original characters like Leona Heidern, Mature and Vice. Other features carried over from the previous year include the ability to choose between the default "Team Fighting" mode or the traditional "Single Fighter" style of gameplay, plus the "Versus" and "Survival" gameplay modes.

The King of Fighters '96 - Gameplay - arcade