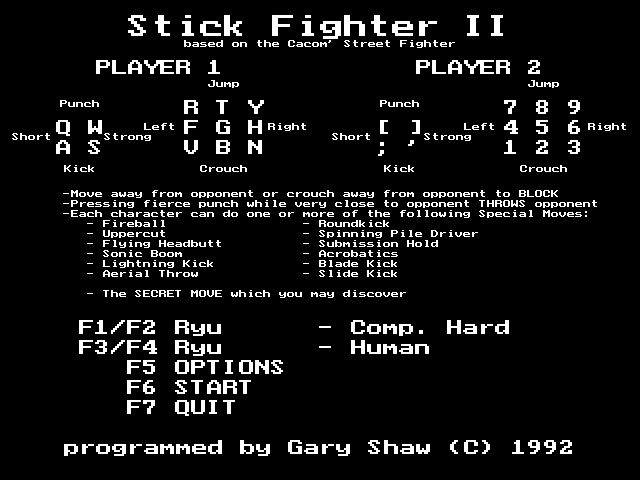 By RomStation : January 3
The exciting pace of Street Fighter II set arcades on fire when it was released, but took its sweet time in delivering some modicum of its exciting gameplay to home platforms. Not everyone was patient enough for Capcom to get on the ball, and clones proliferated, invariably lacking a special je-ne-sais-quoi that made SF2 the killer app that it was.What is lacking here is not such a mystery: it's the graphics, stupid. (If you know of a better way to trim the fat and deliver a SF2 clone in 97k, I'd like to hear it!) All the salient details are present: the original assortment of characters to play against with a friend, the original sound effects, the button combinations permitting special moves from the uppercut to the sonic boom to the spinning pile driver; it's all here. But instead of hand-drawn characters performing animated maneuvers over lush and detailed backgrounds, here you get vector-drawn stickmen (consisting of a mere 13 lines each!) sliding and bouncing across a flat black field, occasionally hadokening a menacing asterisk at each other.In short, a great exercise in minimalism and an excellent demonstration of the difference bells and whistles can make in a game's presentation.