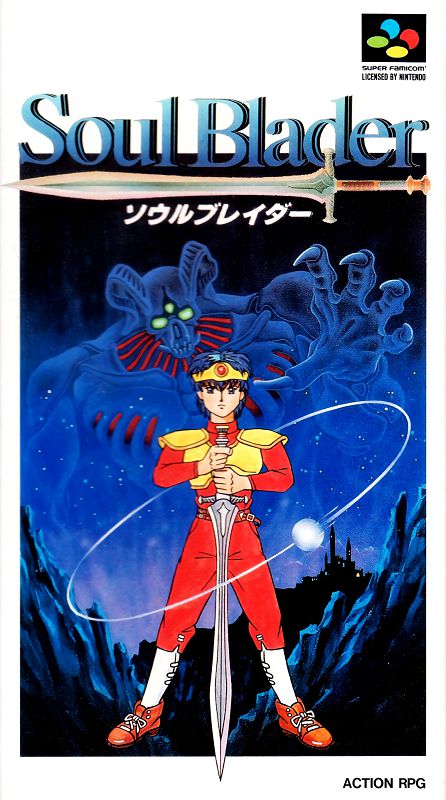 You have been called by the Master to restore life to the Friel empire. The ruler, King Magridd, struck a deal with the evil Deathtoll - in exchange for the soul of one living being, Deathtoll will give him a piece of gold. Magridd's greed got the better of him, and, thinking of the millions of souls of every living creature around the world, readily agreed to the deal. But Magridd himself has since disappeared, and the the land is now devoid of life - instead only filled with Deathtoll's monstrous minions. Will you be able to save Friel's subjects from their horrible fate?

Soul Blazer is an action RPG in the top-down style of The Legend of Zelda. Like Zelda, battles are not turn-based - the player directly attacks enemies and dodges them. As they progress, they also unlock special items which allows them to complete tasks for characters or access special areas (such as the Dream Rod, which transports you into someone's - or something's - dream). Unlike Zelda, the game has an experience meter, and the player levels up and becomes stronger as they defeat enemies. The game's unique hook is that there are "Monster Lairs" spread all over the land of Friel. When they destroy all the enemies in a lair, they don't come back, and when they step on the empty lair, it restores part of the game world, bringing back anything from plants, to animals, to people, to buildings and more. Each restored soul helps in some way - for example, the player can climb regrown ivy to reach new areas, reunite families by bringing back husband and wife, rebuild cities by restoring architects, and talk to characters to complete even more quests.

The player's main goal is to find six Stones, which allow them to gain access to the World of Evil, where Deathtoll resides. These stones are guarded by key characters in different parts of the world, usually the rulers, who require the player to defeat a boss character to rescue them. While most of the game allows them to progress in a linear fashion, there are certain souls that can only be restored by killing monsters that can't be harmed with their earlier weapons. The player will need to find special weaponry and then backtrack to previous areas to rescue these souls. It's also advisable to revisit previous locations, as certain characters may have new sidequests to complete which can reward them with new items to make them even stronger.