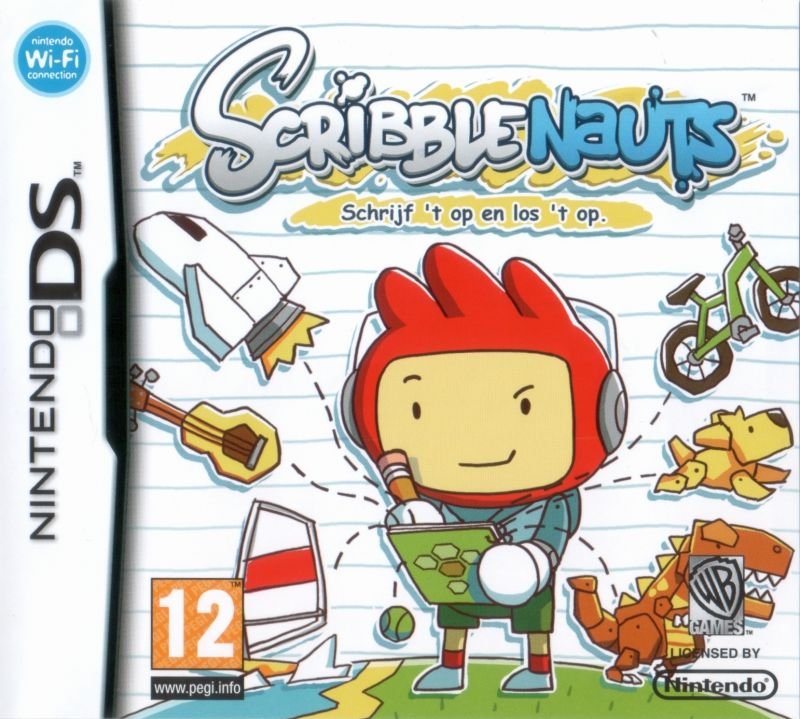 By GambierBae : July 3
Scribblenauts is a side-scrolling action game based on puzzles. The goal is to have the character Maxwell overcome obstacles by summoning objects based on a dictionary of more than 20.000 words, partly based on the concept of the real-life game Mad Libs. This is done by writing an object's name on the touchscreen, letter by letter. When the word is recognized, the object spawns in the world, where it can be manipulated or act on its own. This leads to an endless amount of possibilities to progress through the game. For instance, when an item needs to be retrieved from a tree, you could summon a ladder to get it out, a football to hit it, or just a helicopter or an albatross to fly over there. There are also more bizarre examples, such as summoning a time machine, going back in time to fetch a dinosaur egg, make it hatch and then use it in the future to defeat an army of robot zombies. The list also includes weapons, historical people, and even references to popular cultures and internet memes. Profanity and trademarked objects are not recognized. There is also a spelling checker included to offer suggestions.

This game is a logical sequel to the gameplay mechanics of Drawn to Life, an earlier title by 5TH Cell, relying on the same concept of emergent gameplay, where the actual game is more of a toolbox, shaped through the player's interaction and different in each session. During the game Maxwell needs to collect starites. To do this, two to four objects are often summoned at the same time. There are general, slow puzzle levels, but also faster action levels filled with enemies, platforms, switches and traps. Often, the summoned objects and characters need to interact with each other. Players can earn "merits" for not using weapons in a level for instance and finding a more creative approach. When a level is completed, a silver star is awarded and the Free Play mode for the level is unlocked. When the level is then completed three more times, using a different approach each time, a gold star is provided.

By solving puzzles, Ollars are awarded, the game's currency. It can be exchanged for different avatars or visual changes. The game includes a level editor and support for Wi-Fi to share the levels. The existing levels can also be edited and the way certain summoned objects interact with each other can also be modified.