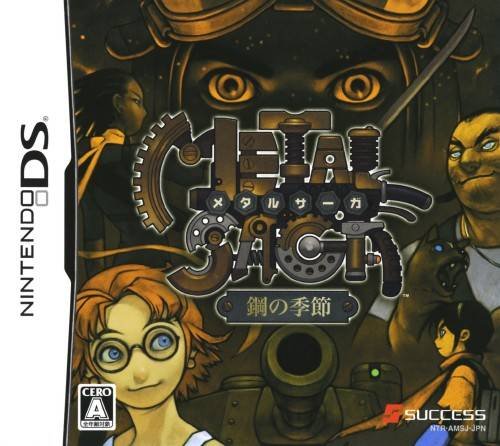 By GambierBae : June 27
Metal Saga: Hagane no Kisetsu is a Role-Playing game, developed by Crea-Tech and published by Success, which was released in Japan in 2006.

In the near future, the world was devastated by a supercomputer named Noah. However, remnants of humanity survived this cataclysm, naming the event Great Destruction. Noah continued its intent to wipe Earth clean of humanity in this post-apocalyptic world. However, a hunter named Rebanna destroyed Noah before its ambition was fulfilled. Noah foresaw the possibility of its demise, and so devised "Noah consciousness awakening program" in this unlikely event and stores it within indestructible super-alloy shell called "Noah Seed." Under this threat, Rebanna's children undertake the task to fight the resurrected supercomputer.

Like most role-playing video games, players travel around the world, buy powerful equipment, battle with monsters and save the world. Unlike all predecessors, the world map uses a 45-degree angle view, and using a point instead town or dungeon' pigeon hole, with the only way from a point to a point; once the player completes the task, the next location will appear on the map.

Combat is individually turn-based, players can choose to combat enemies by foot or with a tank. All party members can equip multiple weapons, and can choose the one to attack enemy in one turn. On the other hand, if the party members choose to fight whilst being in the tank, every character will need to use different weapon to attack enemy in each turn. Each weapon and monster has their own property, like fire, light etc. Allelopathy property will affect the attack effect.