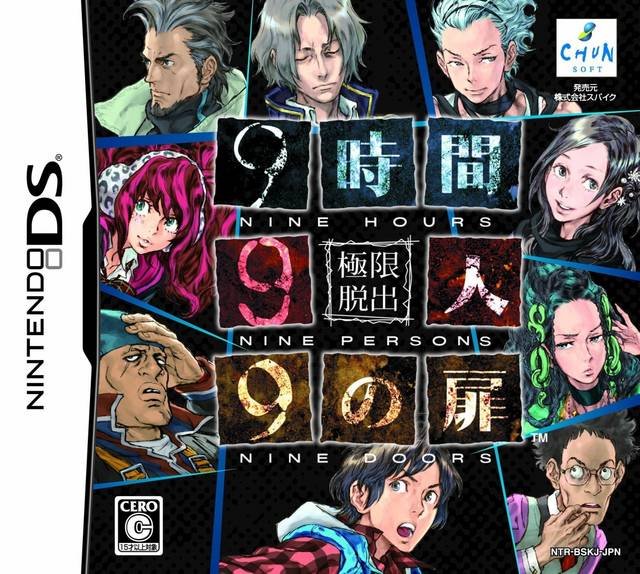 By GambierBae : June 17
Waking up, unsure of where he is, Junpei discovers a watch-like device attached to his wrist with a digital "5" on the face. Trapped inside the room with the only way out being a solid, steel door with a menacing, blood-red "5" painted on it, Junpei has little time to take in his surroundings before a porthole cracks, and water rapidly begins pouring in. As he makes his escape, pieces of memory return, including a strange figure in a black coat and gas mask known only as Zero. He soon meets eight other people aboard what they soon discover is a huge ship. Who are they, why has Zero brought them here, and what is this strange game that Zero has decided to play with their lives?

Nine Hours, Nine Persons, Nine Doors is an adventure game with two different styles of play. The first is a traditional Japanese "Visual Novel" style game, where most of the game is spent reading through text, with occasional choice selections being prompted at points. However, unlike most visual novels, the majority of choices presented in the game send the player on different paths, leading to different areas of the ship, eventually leading to one of the game's six different endings. Based on how the player responds, other characters change their attitudes or personalities, and different events will occur. In the narrative sections, characters and dialogue are shown on the DS' top screen, while a narrator describes thoughts, feelings, and actions on the bottom screen.

The other style of play is more akin to a traditional point-and-click adventure game. At key points in the game, the player and other characters become trapped in one of the ship's many rooms, and must solve a number of puzzles to discover the key and unlock the exit. Puzzles are all logic-based, and relevant clues are placed within the room. Everything you need to escape is within the room, so there is no need for trial-and-error guessing, and you can't get "stuck" because you've missed an object. During puzzles or interactive escapes, the DS' bottom screen is used to navigate the room and select objects to interact with, while the top screen shows dialogue from nearby characters.

A major gameplay element comes in the form of Zero's sealed metal doors spread around the ship. Doors rely on an arithmetic function the game calls the "digital root." Each door has a number, and three to five characters must pass through the door at any one time. The characters that pass must have a total bracelet value that adds up to the "digital root" marked on the door. Digital root is calculated by adding the numbers, and then the sum of those numbers, until only a single digit remains. For example, 7, 8, and 9 would add up to 24. 2 and 4 would then be added to get 6. So the digital root of 7, 8, and 9, would be 6.

Nine Hours, Nine Persons, Nine Doors features multiple endings based on the choices and actions of the player. It is also possible for any of the characters (including Junpei) to be killed in the course of the story, making the game somewhat less linear and the choices somewhat more profound.